As the potential for a globally destabilizing event becomes ever more probable, many concerned Americans are starting to wonder where they’d go if the worst were to happen.

To help answer that question, we can start by identifying the areas of the country to avoid.

The following map of the United States takes into account all of the gun related deaths since the Sandy Hook school shooting. You’ll likely notice that there is one common denominator. The majority of the violence has occurred in major metropolitan areas, with some incidents spreading into outlying ex-urban and rural areas.

If this is the state of our nation during relative peacetime and perceived prosperity, imagine what it’ll look like in the midst of financial, economic or political turmoil.

Americans living east of the Mississippi River will likely experience the brunt of it. But anyone residing in and around any major U.S. city will, likewise, have a tough road ahead of them.

If you live in one of these red zones, you’d better plan accordingly: 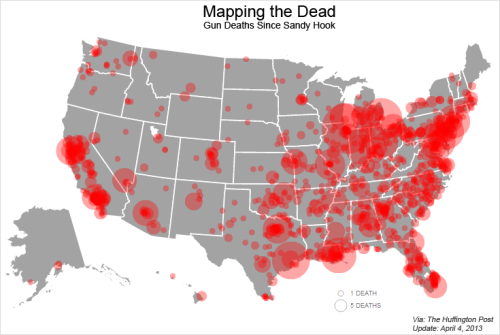 As you may have guessed, the overwhelming factor in determining your chances of survival during a wide-scale regional or national emergency will be population density, a topic that has been extensively covered by Strategic Relocation specialist Joel Skousen:

…every crisis that threatens, even a local crisis, can turn exponential because of close proximity to people who cannot help themselves. Even good people panic in a crisis…

Wherever we find large groups of people, when crisis strikes we will also find the worst that mankind has to offer – rioting, looting, starvation and violence.

Survival expert James Rawles refers to them as the golden horde; the thousands of people who will be desperate for supplies, shelter and safety in the aftermath of a major catastrophe:

…there is just a thin veneer of civilization on our society. What is underneath is not pretty, and it does take much to peel away that veneer. You take your average urbanite or suburbanite and get him excessively cold, wet, tired, hungry and/or thirsty and take away his television, beer, drugs, and other pacifiers, and you will soon seen the savage within. It is like peeling the skin of an onion—remove a couple of layers and it gets very smelly. (Survival Blog)

Given the probability of the United States succumbing to any number of devastating catastrophes that may include an economic collapse, food shortages, pandemic, regional earthquakes, solar storms, or war, there is ample motivation for those with the means to do so to get out of densely populated areas of the country. Likewise, living in locales with close proximity to major thoroughfares such as interstate highway systems could pose a danger as the ‘horde’ evacuates disaster-struck areas.

For many, relocation is not possible because of job requirements or other factors. Thus, those of us who are left with no choice but to remain in populated urban or sub-urban areas, it is strongly recommended that you consider preparedness planning for staying put, or bugging in, during an emergency. It’s not the ideal scenario, but if you plan on hunkering down then you may find it advantageous to have food stores and other long-term supplies, as well as home defense plans. And, should things get so bad that you have to leave your primary residence, be sure to have evacuation plans in place.

The U.S. government is actively preparing to deal with the aftermath of many of the possible crises cited above, namely the civil unrest that will follow. Police and military units are training to deal specifically with urban scenarios because emergency services planners understand that America’s metropolitan death zones will be completely devoid of law & order.

If you’re in one of these areas, and plan on staying during a major crisis, take steps now to prepare for the inevitability of mass chaos.

15 Replies to “America’s Death Zones: Where NOT To Be When It Hits the Fan”