Something strange just happened. Your cell phone, MP3, and household electricity have mysteriously shut off at the same time. You go out to your car and attempt to start it… nothing. Then, a strange nagging hits you that you know what’s going on, but you can’t quite put your finger on it. You soon remember it, because you read about it in a blog once. 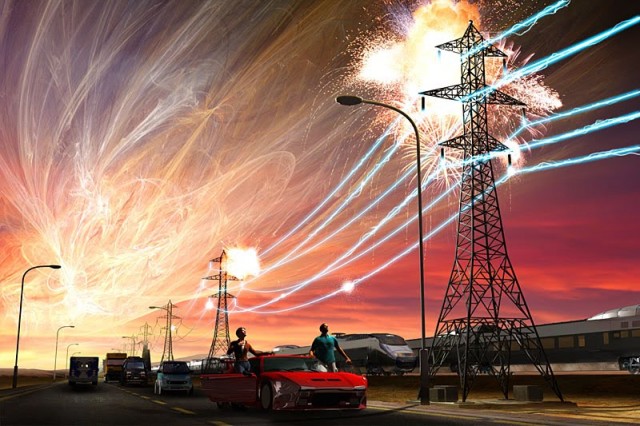 First we need to discuss a little bit more about what’s going to happen in the first few days of an attack. On day one, everyone will probably just assume the power will be back on in a matter of minutes or by the next day. That means that things will not be frantic, people will not be worried, and stores will probably still be open. That makes the very first day the most valuable day of this scenario. Even if you had stocked up and prepared for this beforehand, this day can be the game changer, possibly the determiner of whether or not you and your family will live or die. You must utilize this first day to the best of your ability.

First and foremost, you need to find a neighbor with an old car that still works. If you can’t find a neighbor with an old car or maybe you don’t even have a neighbor, keep in mind that any simple engine will also work (Like ATV’s, riding lawnmowers, gas powered golf carts, etc.). If you aren’t sure if an engine is simple or not, simple engines will almost always have a gas choke on them. The chances are there is someone around you with some sort of vehicle that works that you can borrow. If you can’t find any motorized transportation, ride a bike or walk, but only if you have to, as the quicker you get to the store, the better. Drive or ride to the nearest store with every bit of cash you can find, right down to pennies. Only cash; no checks, credit or debit cards, or gift cards. Cash is the only thing that a store will accept because all of the registers will be down. Don’t worry about conserving your cash, as it will be useless in only a few days, but the stores will not know this at this point. ALL OF THIS CASH NEEDS TO BE SPENT.

Water is a top priority if you don’t live by an accessible source of water (gravity fed water pump, a hand pump, or some kind of water source nearby like a lake, river, or pool). Get water if you need it, but the problem with getting water is that it is bulky and heavy, so this is best if you have a working car. If you have a working car, you can obviously get much larger amounts of things piled into it, so getting a working car on the first day is a top priority. Buy long lasting food, like cans or dried goods. Large packages of dried rice and beans are the cheapest, and rice and beans together are the “perfect protein”. You could live on them for prolonged periods of time, and they last for a good 10 years before they go bad.  If you have the time, ability and cash, it is also highly recommended that you buy IODIZED salt and food for any household pets. Iodine is an important nutrient that most Americans already don’t get enough of and it can be used to purify and clean things and as a hunting lure (because deer love salt [thanks for the info mizztanya]). Get the food for your pets to prolong their life and not tempt you to feed them some of your own rations. Having a pet is a great comfort in a time a survival and losing a pet is just another blow to the face in a crisis, so try to keep them alive.

After gathering all the food you can, it is time to go to a sporting goods store if you have one nearby. Wal-Mart has a sufficient sporting goods section to work so if you can just make one stop at a Wal-Mart or similar supermarket, that is preferable. At the sporting goods store or section, pick up ammunition for any guns you have (you had better hope you have a gun, at least a .22). The ammunitions are prioritized from first to last, the last ammunition to buy being the least important. Make sure you get enough of the first munitions before you buy ammunition from lower priorities. At the top priority is .22 ammunition. If you have a .22, get the most ammunition for that. Many stores sell them by the 500 round boxes, so pick up a couple of those big boxes as they can provide a steady income of food through small animals. Next, get shotgun shells if you have a shotgun. A shotgun can hit a small moving target, so they make hunting a lot easier and expand what you can hunt. When buying shotgun shells, buy all or mostly bird shot, and maybe a box or two of buckshot for hunting large animals or defending your home. Next, buy bullets for any rifles you have, or maybe a bunch of ammunition for your best rifle. At the bottom of the list is handgun ammunition. Handguns are very limited in what they can do hunting wise. Your top priority with ammunition is to feed yourself and those you love.

Next stop is to the pharmacy (again, many Wal-Marts and other supermarkets have pharmacies also, and one stop is better than multiple stops). You will need some basic first aid supplies, and some more advanced first aid supplies if you are a nurse or doctor. Antibiotics are a high priority, as even the smallest of cuts can get infected without proper care. Antibiotics also cure a number of things, so if at all possible, get some. If you require any medications, get them here and get as many as possible. Unless you stocked up beforehand, you WILL run out before more medications start coming in. To be blunt, Almost all diabetics will die. Insulin for diabetics must be kept at exactly at 40 degrees Fahrenheit. The shelf life is halved with each 10 degree variation. Try to slowly wean yourself off of any medication you take regularly. Stopping cold turkey will result in a withdrawal, which you do not want.

Batteries are also very important to get. Flashlights will be your only source of light, and if any of your electronics do survive, there will be no plugging them into the wall. While in the sporting goods section, look for camping items. These items can be huge blessings to whoever gets them. If you can find some good shoes, meant for walking long distances, get some for everyone in your house. Some common camping items that can help you are:

-Emergency blankets (usually come in small pouches and are silver)

-Hand warmers (the kind in the packet)

Here is a full list of items for EMP preparedness

The crank powered radio would easily be destroyed by an E.M.P. blast, but there may be a way around it for small electronics such as this. It is said that if you wrap things in multiple layers of tin foil (a LOT of layers) that it hardens things against E.M.P. While this may be true, do not rely on it, as it has not been tested full scale. In case this does work though, it would be wise to wrap some walkie talkies in many, many layers of tin foil. Communication is the most valuable thing in an E.M.P. scenario.

If you fully take advantage of Day 1, and you prepared ahead of time, you will be better off than anyone else in your town in the days to come, Which brings us to the next subject: the town you live in. Your town will be your government. In the event of an E.M.P., Martial Law will be declared in a matter of days. Towns will be the centers of life, and the chances are, you won’t travel out of your town much. The smaller the town you live in, the better off you will be. Rural farming communities are the best off, as they will be able to provide their own food and water easily. Cities such as New York will be massively chaotic and will starve in a matter of days. If you live in a large city, and an E.M.P. strikes, EVACUATE IMMEDIATELY. Take whatever you need, go to the store if you have to, and GET OUT OF THERE. Cities such as New York are built to rely on our highly intricate web civilization. These cities do not produce enough to sustain their occupants. Rural farming communities can sustain more than their occupancy though, and are ideal hubs of survival in any disaster, but especially an E.M.P.

Day 2 of an E.M.P. strike can also be valuable. Organize what you have and help others get organized too. After you are set and ready, help others in your community understand what is going on, but do so without causing a panic. Tell others what they need to do to get ready, and start finding people with valuable skills, such as nurses and doctors, plumbers, electricians, mechanics, dentists, skilled hunters and fisherman, gunsmiths, and even some military or ex-military types that can serve as community guards. Skills like these can make a community sink or float in an E.M.P. scenario.

On Day 3 people are going to start figuring out what is going on. People will realize that the power isn’t coming on, and there might be a huge rush on the stores. Widespread looting will occur, and people just might be willing to hurt you for supplies. Do not leave your house if you suspect panic, and just hope and pray that you got enough supplies to last you for at least a little while because there will be nothing left after the looting occurs. The days timeline here are approximated and will vary according to your city and the people who live in it, but what will happen in these days if an E.M.P. strike hits America is very real and very likely to occur.