There are few things that could revert our modern day civilization back to the Stone Age. Most of them are naturally occurring events such as a massive asteroid impact, a global Tsunami, or a super volcano. But as far as man-made events go, an electro-magnetic pulse (EMP) attack on our national power grid

would be so devastating that, according to a panel of experts who addressed Congressional members on Capitol Hill this week, a nuclear strike would pale in comparison.

Such an event could originate from our sun as a powerful solar discharge or in the form of what experts call a Super EMP bomb, a device currently being tested by China, Russia and North Korea that’s capable of deploying a nuclear warhead-tipped ballistic missile several hundred miles over the continental United States. It’s a line-of-sight technology, meaning that if it’s detonated above the central U.S. the electro-magnetic burst from the detonation could reach from coast to coast, destroying electronic components and utility company transformers along the way. 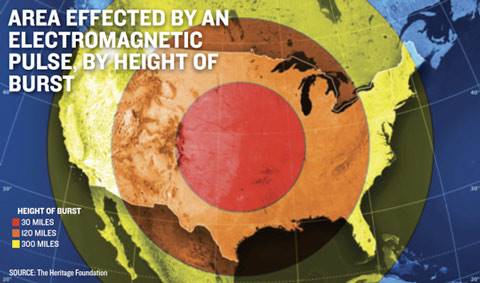 Within seconds every electronically powered device we’ve come to use in our interconnected world would be rendered useless. Cell phones, GPS systems, residential electricity lines, and even the electrical ignition systems in cars would no longer function.

“Some would say it’s low probability, but the damage that could be caused in the event of an EMP attack, both by the sun, a solar event, or a man-made attack, would be catastrophic,” said Rep. Michael McCaul (R-TX) at a hearing of the Homeland Security Committee’s Subcommittee on Cybersecurity, Infrastructure Protection, and Security Technologies.  “We talk a lot about a nuclear bomb in Manhattan, and cybersecurity threat to the power grid in the Northeast, and all of these things would actually probably pale in comparison to the devastation that an EMP attack could perpetrate on Americans.”

As noted by The Washington Free Beacon, Congressional members are so worried about such a possibility that they are feverishly working to pass legislation that would implement new protective measures across the national power grid.

“Every single facet of modern human life would be crippled by such an event.”

“It strikes at my very core when I think of the men, women, and children in cities and rural towns across America with a possibility of no access to food, water, or transportation.”

“In a matter of weeks or months at most, a worst-case scenario could bring devastation beyond imagination.”

“The civilian grid, in my judgment, is very vulnerable.”

“Some of the largest transformers, the very largest ones, have an inherent resistance to all but the more intense electromagnetic pulses. But the fact is, we have enough of those mid-range transformers where a major event would be catastrophic.”

Former Congressman Roscoe Bartlett takes the threat so seriously that he has urged Americans with the ability to do so to move out of major cities, citing the fact that electrical transformers are now built outside of the United States and require a manufacturing lead time of anywhere from 18 to 36 months. Should a cascading surge happen across the U.S. power grid all at once it would be impossible for utility companies to restore electricity services in any reasonable amount of time.

Preparedness expert Tess Pennington of Ready Nutrition says that while government is ready to keep their essential operations online, the rest of us will be left to fend for ourselves. Many are following in the footsteps of Roscoe Bartlett in anticipation of an eventual “down-grid” scenario:

Some have seen this problem coming for a long time and changed their entire way of life by going off-grid. They have found alternative sources such as solar, wind and diesel to power their homes and machinery. A majority of us, who have not gone off-grid, are making a concerted effort to avoid dependence on this ailing infrastructure and preparing for life without it.

It may sound improbable, but last year at a hearing on national security, Congresswoman Yvette Clark (D-NY) laid to rest the notion that a nationwide EMP event is nothing to be concerned about.

“The likelihood of a severe geo-magnetic event capable of crippling our electric grid is 100%,” she warned.

Thus, according to the experts and the Congressional members who have been made aware of the threat, this is going to happen at some point in our future. The only question is whether it comes in the form of a natural disaster or a man-made attack. Either way, as highlighted by the Center for Security Policy, within one year some 9 out of 10 Americans would be dead.

“Within a year of that attack, nine out of 10 Americans would be dead, because we can’t support a population of the present size in urban centers and the like without electricity,” said Frank Gaffney, president of the Center for Security Policy.

There is no contingency plan to save the civilian population because emergency management personnel simply wouldn’t have the man power or supplies to provide food, water and security for 300 million

Americans who will have lost access to life’s most basic necessities.

Until the entire national power infrastructure has been shielded against the threat of an EMP attack, the only option for civilians should it strike is to bunker down and hope you’ve got the supplies to survive in an off-grid situation for an extended period of time.

Help won’t be coming in the aftermath because the entire system will be overwhelmed.

Prevention through hardening our grid is the only long-term solution.