One of the most common survival problems we all potentially face is a power grid failure. In just about any disaster, we can count on the power going out, at least on a local basis. For that matter, it doesn’t even take a disaster; a sizeable storm can take down the power grid and leave people without power. 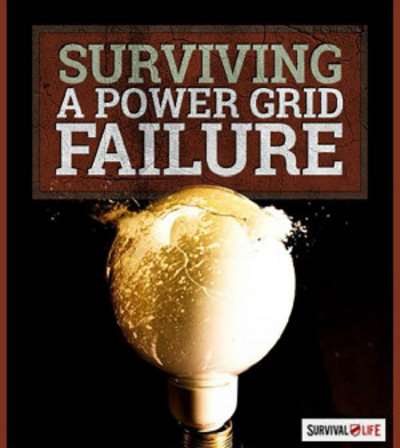 One of the most serious disasters we face today is an EMP attack. Should an enemy decide to attack us via an EMP, most of our country’s power grid would go down. The same thing could happen from a carefully planned and executed terrorist attack. Should either of these happen, government estimates say that it would take years to repair the damage to the power grid and other infrastructure, and that about 90 percent of the population would die in the first year.

While the country came to grips with the power grid failure and loss of electricity, you and I would have to figure out how to take care of our families without electrical power.

We use electrical power for many things on a day-to-day basis. None of those things would work in a power grid failure. To start with, we’d lose heating and cooling for our homes. We’d also lose refrigeration to keep our food from spoiling. At the same time, all of the electronic devices that help us get the news, do our work and entertain us would stop working as well.

Preparing for a Grid-Down Situation

If there is any one disaster situation for which we should be preparing, it’s the power grid going down. Of all possible disasters, this is the one that could truly end life as we know it. I’m not saying that we would all die (although many who are unprepared would), but that life as we know it would end. We’d have to come up with a new plan for survival.

The most important thing we need to do in preparing for a grid-down situation is to stockpile the necessities of life. This means food and water, as they would no longer be available to us. It also means fuel, medical supplies, candles, and any of 100 different things that we need to survive. One of the most important things to stockpile would be heirloom seeds, so that we could grow food to eat, once food stopped showing up on the grocery store shelves.

In addition to stockpiling, we need alternative ways of doing the things which we depend on the power grid for. That especially means heating our homes, providing light at night, cooking food, preserving food and getting clean water to drink. None of those essential things will be available to us in a grid-down situation.

In most cases, we will be forced to go back to the ways our ancestors did things before the power grid. We’d have to heat our homes with a fire, carry water from the creek, use candles for light and forget about refrigeration to keep our food fresh. Refrigeration would mean digging a root cellar in the backyard.

When the Power Grid Fails, Make Your Own Electricity

Another thing to consider in your preparations for surviving a grid-down situation is to develop the means to make your own electricity. This usually means either solar power or wind power. Creating enough electrical generation capability to run your home would be very expensive, but you could create enough to run a few small devices fairly easily.

Of course, that’s assuming that the electrical grid didn’t g down from an EMP. The same EMP attack that takes down the grid will also destroy all of our solid-state electronics. You will no longer be able to use your computer or cell phone, even if you do have electricity. The only electronics that will survive, will be those that are protected by a Faraday Cage.

What to do when the Lights Go Out

Power outages aren’t all that uncommon, so it may be difficult to tell the difference between a short-term outage and one that is going to be out for months or years. So, the first thing to do when the power goes out is to gather information, so that you can determine what happened and have an idea if the power will be back on soon.

Assuming that the power is going to be out for a prolonged period of time, you’ll need to put your survival plans into effect. Start by gathering all the last-minute supplies you can, before the looters hit the stores. Even if you have a healthy stockpile of food in your home, it won’t hurt to gather up a bit more while money is still being accepted.

Upon returning from the store, it will be time to change over to a power-free lifestyle. You’ll need to start heating your home with a wood fire. Any food that you have in the refrigerator and freezer will either need to be eaten or preserved by other means immediately. The fridge will only keep that food fresh for about two days, without electricity. Dehydrating your meat in the sun will be much better than losing it to spoilage.

Cooking can be done over a fire as well. Lighting will mean using candles or oil-burning lamps, once your battery supply runs out. You’d be better off starting out with the candles and lamps from the start, and leaving your flashlights for when you really need them.

Gathering and purifying water will become one of your most important daily tasks, as you will need enough water for your family to drink, to wash with and to keep your vegetable garden growing. The only water which will have to be purified will be the water you drink and the water you wash your dishes with. Everything else can be done with water that hasn’t been purified.

You will need to get seeds in the ground as soon as possible, after the power goes out. No matter how big a food stockpile you have, it will eventually run out. Growing your own food will be an important part of keeping your family eating.

Whatever you do in such a time, don’t let others know that you are better off than they are. People will be literally starving to death, so you don’t want them to know that you have food. If they find out, there’s a good chance that they will gather together to attack your home. That’s something that you can’t afford.