Native Indians of South America used this root to make a black juice called Cassareep that preserves meat for long periods of time. 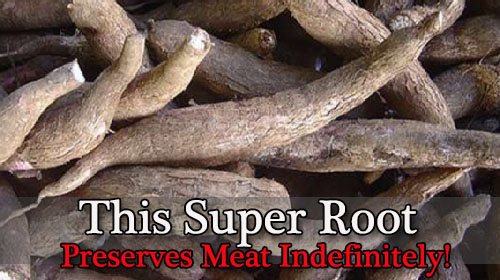 Some even say INDEFINETLY.

Nowadays, most Cassareep is exported from Guyana, South America and is available in bottled form. It can be bought in many stores in the USA, Canada, UK,  Australia or on Amazon.

One to preserve meat and two, in particular its wonderful bittersweet flavour. Cassareep can be used as flavouring to dishes as well as certain soup recipes.

Related: How to Make Pemmican – The Ultimate Survival Super-Food

Now the Antiseptic quality of Cassareep is the wonderment of the Root:

This property allows food to be kept outside of the fridge and in open air as long as the mixture itself is kept free from outside pollutants such as saliva.

There is a legend according to a lady Betty Mascoll of the Caribbean island of Grenada that there was a Pepperpot (A dish made from Cassareep and meat) that was maintained like this for more than 100 years! In Dutch Guyana also called Suriname, Dutch planters reportedly had these dishes in daily use and kept them cooking for an incredible amount of years. This was also used in many country clubs and businessmen’s clubs. 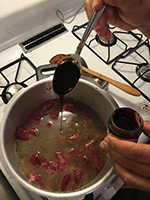 The “preserving process” is quite simple. Here’s what you need in order to make the “PeeperPot Stew”:

Wash and season the meat with black pepper and salt.

Place all ingredients in a large pot of water, approximately 4 – 5 cups of water, enough to cover the meat. 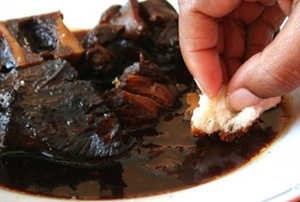 Cover and bring to a boil for about 2 hours, or until meat is very tender, and the water is 1/4 of its original content. This water becomes your pepper pot sauce.

Put the content into a jar or keep it in the bowl.

Simply warm and re-use any time you are hungry.

Using Cassareep prevents this dish from spoiling for at least a few weeks un-refrigerated.

To keep the Pepper Pot lasting for years on end, native Indians constantly added Cassreep and game meat to the pot… and boiled it again every time they added new stuff.

1 – Using a dirty (un-washed) spoon or a spoon that was used in any other food will deteriorate the Pepper Pot and cause spoilage almost immediately;

4 – Do not use/eat the root directly – it is poisonous; do not attempt to extract the Cassareep from the root unless you know what you are doing.

The medical properties and the antiseptic uses circle around eye infections such as Conjunctivitis and corneal ulcers but the Reverend J.G. Wood who wrote Wanderings in South America – 1879 was widely criticised apparently for not mentioning the properties of cassava juice which “enables the Indian on a canoe voyage to take with him a supply of meat for several days”.

We should thank the native Indians of South America for their practical wisdom.

Want to be as self-sufficient as possible? Want to learn how to build a root cellar just like the Native Americans did?  Then you really need this amazing step-by-step guide. It is called The Lost Ways and it contains all the knowledge of our forefathers.

Table Of Contents:
Making Your Own Beverages: Beer to Stronger Stuff
Ginger Beer: Making Soda the Old Fashioned Way
How North American Indians and Early Pioneers Made Pemmican
Spycraft: Military Correspondence During The 1700’s to 1900’s
Wild West Guns for SHTF and a Guide to Rolling Your Own Ammo
How Our Forefathers Built Their Sawmills, Grain Mills,and Stamping Mills
How Our Ancestors Made Herbal Poultice to Heal Their Wounds
What Our Ancestors Were Foraging For? or How to Wildcraft Your Table
How Our Ancestors Navigated Without Using a GPS System
How Our Forefathers Made Knives
How Our Forefathers Made Snow shoes for Survival
How North California Native Americans Built Their Semi-subterranean Roundhouses
Our Ancestors’Guide to Root Cellars
Good Old Fashioned Cooking on an Open Flame
Learning from Our Ancestors How to Preserve Water
Learning from Our Ancestors How to Take Care of Our Hygiene When There Isn’t Anything to Buy
How and Why I Prefer to Make Soap with Modern Ingredients
Temporarily Installing a Wood-Burning Stove during Emergencies
Making Traditional and Survival Bark Bread…….
Trapping in Winter for Beaver and Muskrat Just like Our Forefathers Did
How to Make a Smokehouse and Smoke Fish
Survival Lessons From The Donner Party

One Reply to “This Super Root Preserves Meat Indefinitely!”