Today the USA is the world’s economic and industrial superpower, but it hasn’t always been like that. In fact compared with some other countries, like the UK – which began industrializing at the end of the 18th century – technology and industry are quite recent arrivals. 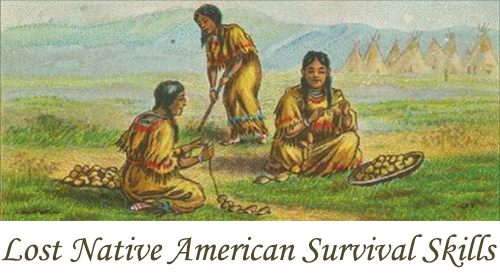 Just 200 years ago the USA was the East Coast; to the west of that was a vast, often mysterious land that few Europeans had ever explored. Until the Civil War era most of it was the domain of the Native Americans.

The Native American people lived with much less technology than even the earliest European settlers had access to. They had no firearms, no wheeled transport and no industry at all. But, despite all that, they managed to survive in the often harsh conditions of the American wilderness. In fact they were better at surviving than the early settlers – every winter the weather, famine and native attacks took their toll on the first colonies.

Native Americans might not have mastered industry, but they had highly developed traditional survival skills. How did they use those skills to not just endure in the American environment, but to thrive and dominate it for thousands of years?

Related: Lost Remedies from Our Forefathers

One thing most of us know about Native Americans is that they lived in harmony with the land. They didn’t believe it belonged to them – they were looking after it for future generations. They did manage the landscape, burning grasslands and forests to encourage new growth or clearing areas for farming, but they paid a lot of attention to making sure resources were conserved wherever possible. All Native American cultures were built around a deep and spiritual connection to the land.

To feel a spiritual connection with something you have to know it, and they certainly did. Native Americans constantly studied what was happening around them and learned to read the signs of the natural world. They learned to make quite accurate short-term weather forecasts. A ring around the moon reveals moisture in the atmosphere and is often a sign of rain; flat-bottomed clouds with a puffy or anvil-shaped top mean a thunderstorm is on its way.

Animals could also signal changes in the weather. Horses get nervous when a storm’s approaching. Many small animals, like squirrels, seem to have some ability to know when a long or cold winter is approaching. If they start gathering food stores earlier than usual, and building a bigger supply, a hard few months could be ahead.

Related: Top 9 Animals to Raise in a Post Apocalypse World

These were important things for people to know. Surviving through the winter depended on having stores of dried food, and if that food was soaked by a storm before it was fully dried and packed away it would probably spoil. For the extended family or tribe who were preparing it, that could mean disaster. A longer winter also meant more food would be needed, so if the squirrels were building bigger stores it was a good idea for the people to imitate them. 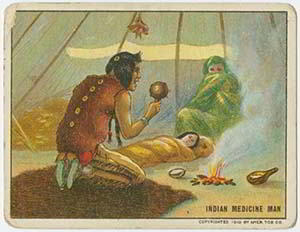 Medicine men – and women – were the keepers of the Native Americans’ herbal lore. With no doctors as we would know them, illnesses had to be treated with plants. Many plants, including tobacco, were collected or grown for their medicinal properties. Some of those properties were more wishful thinking than real, but others could be very effective – for example some tree barks contain anti-inflammatories related to aspirin.

Hunting was an important part of life for all Native Americans. Some of the peoples lived a semi-settled existence, farming around their villages in summer and perhaps moving south in winter; others were more nomadic, foraging as they went. All hunted, harvesting their protein from the land – and they used their kills with incredible efficiency.

Wasting any part of a harvested animal was seen as an insult both to the hunter and the animal itself – and in any case, waste was stupid. Native Americans were skilled hunters, but even so, with no firearms hunting was difficult and often dangerous. Many of the peoples – especially the nomads – lived in areas where good bow wood was in short supply, so their bows usually had a short range. Getting close enough for a successful shot took huge skill, and the kill was too precious for waste to be allowed.

Native Americans were extremely good at using animal parts. Once the meat had been eaten or dried, antlers and bones could be used as raw material for tools. Sinews and scraped intestines made cord, thread and bowstrings. Hides were tanned and turned into everything from footwear to shelters. 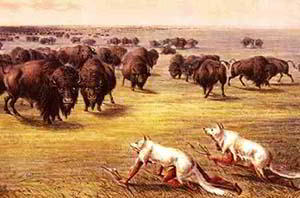 Hunting, and sharing a landscape with dangerous animals, means a mastery of stealth was essential. Native Americans were famous for their ability to move unobtrusively through the terrain, often ambushing settlers or troops with no warning at all. Being able to read the ground was part of it – hunters and warriors could easily select routes that would let them move silently and under cover. Techniques for silent movement played a part, too.

Modern soldiers learn to walk quietly through forests, but the techniques aren’t the same. Heavy combat boots tend to make a noise, so to minimize that soldiers learn to lower the ball of the foot gently with each step, feeling for any dried leaves or twigs that might make a noise, then slowly put their full weight on that foot. Native Americans, who wore soft moccasins or went barefoot, could use a very different method.

The secret of stealth was the Fox Walk. This is totally different from the modern method, because it doesn’t have to allow for heavy boots with thick soles. It’s also more energy efficient, so you can cover more ground in silence without tiring yourself out. To do the Fox Walk, place your heel gently on the ground. Then roll your foot forward until the ball touches down. With soft (or no) footwear you can feel anything that’s likely to snap or rustle, and move your foot clear of it if necessary.

You won’t be racing along using the Fox Walk; it’s a slow way to move that gives you time to study the ground you’re about to walk on and the landscape around you. In fact it’s ideal for hunters or anyone who wants to keep their spatial awareness at a peak. If there’s more than one of you then, for maximum stealth, stay quite close and step in the footprints of the person in front. This won’t just help hide your numbers from trackers; because the leader has already selected and tested each footfall, there shouldn’t be any noisy surprises there.

Stand up and stretch your arms out to your sides, wiggling your fingers. When you can’t see the movement any more your hands have moved out of the area of peripheral vision you’re using. Stop your arms there and look off into the distance; don’t concentrate on anything you can see, wiggle your fingers again and see if the movement is visible again. When you get to the point you can see it with your arms straight out to your sides, you’re using wide angle vision.

Native Americans reached America just after the last ice age, and survived for thousands of years in a land that could be harsh and unforgiving. They did that without any of the technology we rely on today, and that makes their skills and knowledge worth preserving. Whether you get caught in a storm on a hunting trip, or the SHTF so badly that our technology base never recovers, those skills could save your life one day.

Here’s a video tutorial for pemmican: 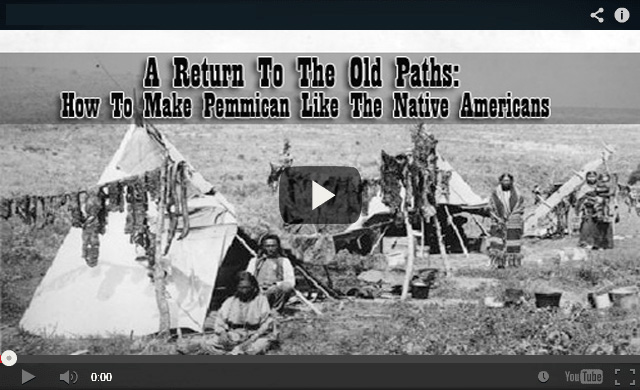