Want to know the best thing about cast iron skillets and pots? They’re practically indestructible and will last literally hundreds of years. 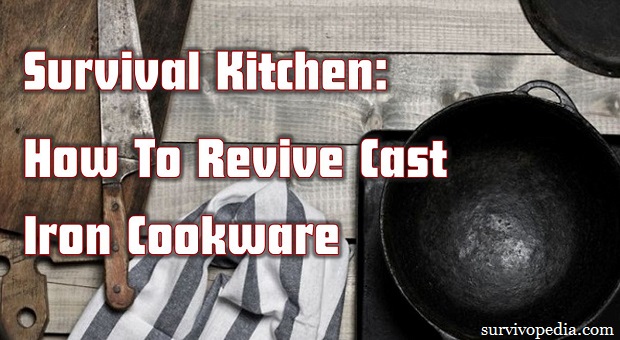 I used to have a couple that were well over a hundred years old. When they were stolen, I was heartbroken. Yes, that’s right. Somebody stole them. And that, my friends, is about the only circumstance from which you can’t revive your cast iron cookware.

Another great thing about cast iron is that, unlike most other kitchenware, you can use it on an open camp fire without damaging it. As a matter of fact, Dutch ovens were designed for just that use. They’re suitable to bury in the coals and use them as an outdoor oven.

Since you can use them outdoors, they’re excellent for making one-dish meals in and come in sizes that can accommodate a meal for one or a meal for ten depending on your needs.

How to Find Quality Cast Iron

I absolutely love this part – I have 6 different pieces of cast-iron cookware and I only bought one of them new. I found each of the other pieces at yard sales and junk stores.

Actually, I found the two skillets that were stolen at an old “antiques” store (translate junk shop) that sat along the highway leading into Mt. Airy, NC. I bought each of them for $5. Best 10 bucks I’ve ever spent.

This is the most important investment you can make to your well prepared survival kitchen!

I live in Florida now, and I still see them at about a quarter of the yard sales that I go to, and probably three quarters of the estate sales, and most of the time they’re listed at less than $5. The salvation army and Goodwill frequently have them, too.

You can, of course, also find them used online from places like eBay, Craigslist, Freecycle, and Letgo, and you can buy them new at any home goods or super store. Basically, cast iron cookware is about as easy to find as toilet paper. Well, almost.

What to Look For

The good thing about cast iron is that even if it’s got some surface rust, it’s usually redeemable. What you want to watch for, though, are integrity issues.

Make sure that there aren’t too many cooked-on rough spots because, though you CAN get usually get them out, it’s a lot of work considering how easy common pieces like skillets and griddles are to find. If it’s a good one and you’re willing to invest the elbow grease and the time it will take to re-season it, then use the rough spots as a means to talk them down on the price.

Just make sure that it’s actually a cooked-on rough spot, though, and not rust that’s been painted over. I’ve seen it, believe it or not.

If you flip the cast iron skillet or pot over and there’s a lipped ridge or rim around the bottom of it, it’s an old one. That lip was used to keep it steady on top of a wood burning cook stove, so you can figure it’s a good 100 years old, at least, and likely older.

There will also likely be a seam visible across the bottom. Don’t let on like you know what you have because, if it’s in good shape, you’ve found a gem!

How to Revive Old Cast Iron

Now that you’ve got your gem at home, it’s time to bring it back to life! What I’m about to tell you may earn me some frowns from “those who say so,” but I’m speaking from 30 years of experience finding, reviving, and using cast iron cookware.

If it has rust that won’t just rinse off, sticky stuff, or baked-on crusties, use a steel wool pad to scrub all of the rust off. All of it. Inside and out. Yes, I’m aware that they say not to do this, but who are ‘they’?
Now that you have a clean, rust-free surface, it’s time to re-season it. Preheat your oven to 350 degrees F and bake the piece until it’s almost too hot to handle.
Remove it and apply a thin layer of vegetable oil, olive oil, or solid shortening inside and out. No butter or cooking spray. You may want to put a cookie sheet under it in the oven in case it drips, but you really shouldn’t have that much on it.
Put it back in the oven and bake for an hour, then allow it to cool completely and repeat the process. I like to repeat twice, at least, so that the seasoning really has a chance to set.
Remember that this is just the beginning of the seasoning part and unless you were fortunate enough to get one that already had a nice seasoning to it, it may take a few uses for the seasoning to completely cure and build a hard, non-stick coating on the inside of the pot or skillet.

The first few times I use a new skillet, I like to cook fatty foods such as bacon, sausage, or other meats in them so that they can absorb the fat and really get a nice non-stick coating going. Before you know it, it will be the best egg skillet you have. Seriously.

People differ in how they like to clean their cast iron. Some say not to use any soap, ever – just wash it out with water and call it good. I have a bit of a problem with that because of silly little things like salmonella and other creepy crawlies that make people sick. I use soap, but make sure that I rinse it WELL.

I definitely do not use steel wool on any of my skillets or pots after they’re seasoned. You shouldn’t have to. If food becomes cooked on, I just put a bit of water in the skillet and if it won’t soak off in the sink after a few minutes, I place it on the stove with about a half-inch of water in it and bring the water to a boil. That usually works to get off any stuck-on food.

Once you’ve washed it, place it on the stove on low heat so that it dries completely, then add a thin layer of oil (I just put a drop in the middle of the skillet and wipe it around with a paper towel) and let it cool. Done.

I really can’t emphasize enough how important it is not to let your cast iron air dry. It promotes rust, plus each time you heat it and add oil, it helps keep it non-stick so that your great-grand kids can enjoy it long after you’re gone. They will appreciate it as much as we appreciate the knowledge that we’ve inherited from our forefathers.

We still have a lot to learn from our ancestors. Click the banner below to discover more of the secrets that kept them alive!

Watch the video below and uncover more survival secrets !

One Reply to “Survival Kitchen: How To Revive Cast Iron Cookware”