Knowing how to make a natural pain reliever if you’re stuck in the wild can be more helpful than you think. Because aspirin is a pain reliever, anti-inflammatory, blood thinner, and fever reducer, it has many uses. 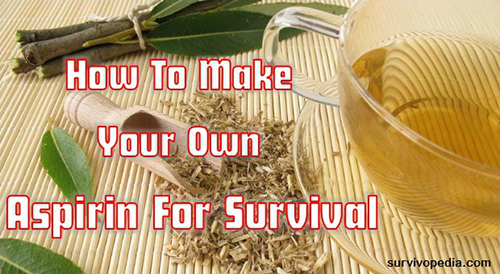 Fortunately, most of the United States hosts a tree or three that has salicylic acid – the active ingredient in aspirin. We’re going to tell you how to make your own, sort of!

First, remember the rule – “natural” doesn’t equal “safe.” Arsenic is natural but you wouldn’t eat it. Well, you might, but the results would be less than desirable! Anyway, now that you’ve been warned, apply the rule to aspirin.

Some people are allergic, so it’s important, especially in a survival situation, to know whether or not you can safely take it.

Side Effects of Aspirin

Aside from the results of being allergic, there are some common side effects that you may experience even if you can take it. These include:

Consuming too much can be fatal, so take only what you need to do the trick. 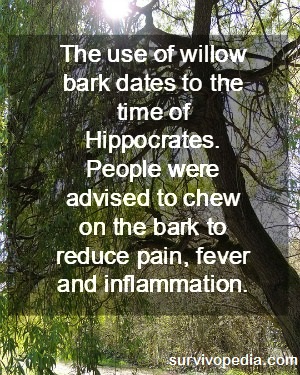 Though willow tree bark is by far the most common source of salicylic acid because it’s so rich in it, there are several other plants that contain the acid, or its base, salicin.

For instance, birch trees and poplar trees contain salicylic acid in their barks, and berries are a decent source of it, too.

Medicinal use of willow bark dates back to the days of Hippocrates, when it was used to reduce fever and treat inflammation.

It’s been used throughout the centuries across the world, and is still used today, to treat pain (particularly back pain and arthritis pain), menstrual cramps, headaches, stroke prevention, high blood pressure, and inflammatory conditions such as tendonitis and bursitis.

Other good sources are the purple willow, black or pussy willow, and the crack willow. You should research your area so that you know which, of any, of these trees are local to you.

If you don’t live in an area that has willow trees, birch trees, particularly white and yellow birch trees, contain methyl salicylate, the forerunner to synthetic aspirin. The white birch is also called canoe birch, sweet birch, silver birch, or lady of the woods.

Cottonwoods, poplars, meadowsweet, and black haw also contain salicosides. In all of these trees, the inner bark is the medicinal part. That’s the papery part of the bark that you find when you peel the bark away from the tree.

If you don’t have any of those trees around (which would be rare in the US), many fruits and vegetables, including blackberries, blueberries, cantaloupe, grapes, dates, kiwis, guavas, apricots, olives, green peppers, radishes, tomatoes, chicory and mushrooms, also contain significant amounts of salicin.

For today, we’re going to focus on how to make aspirin from willow bark and birch bark. Both white birch and willow trees grow in zones 2-9, which includes almost the entire US except for the southernmost part of Florida, and maybe a few southern parts of California, Texas, and Arizona.

Both trees like moisture and are typically found growing wild in forests and around a water source. Look up your area, determine which types of trees you have around you, then scout them out. For that matter, it won’t hurt to have some willow or birch bark on hand at all times if you prefer natural treatments.

How to Make Aspirin from Willow Bark or Birch Bark

Remember that dosage is important because willow bark, in too high a dose, can make you really sick. Same thing with birch or any other source. If you’re new to the game, it’s probably best to start with a smaller dose and take a bit more if you don’t see results in 45 minutes or so.

A white willow has a rough, furrowed, grayish bark, smaller branches that are golden brown, slender, and flexible, and long, slender, finely serrated leaves. The tops of the leaves are shiny and green, and the undersides are silky and white. They alternate instead of being opposite each other on the branch.

To find physical descriptions of other willows, check your local guides. A good test, though, is to look at the leaves. Willow tree leaves share the same characteristics regardless of species.

After you’ve found the tree, it’s time to harvest the bark. This is easy – just peel away a piece of the bark, making sure to get the papery part between the hard bark and the meat of the tree. It’s much easier to peel the bark from smaller branches than from the trunk of the tree.

At this point, the bark can actually be chewed to achieve local anesthetic benefits as well as systemic ones, especially if you have a toothache. You can also make a tea, tincture, or powder from it.

To make the tea, let the bark dry for a few hours if you can. You don’t have to, but it’s recommended for best results.

Bring about 3 cups of water to a boil, if you have that much to spare. If not, use what you have. Put the bark in and continue to simmer. This serves two purposes – you’re making the tea and purifying the water at the same time.

If you’re using heat to purify the water, make sure to boil it for at least 10 minutes, with or without the bark. Use about 1 tablespoon of bark for each cup of water. Simmer for 5 to 10 minutes and remove from the fire.

After removing your tea from the fire, let it steep for 10-20 minutes. By that time, it will have cooled enough to drink. Drink a cup of the tea every few hours. Watch out for side effects and adjust the dose accordingly.

You can also make a decoction by boiling for a bit longer – 15-20 min – and letting it steep as directed for the tea.

Without a doubt, the powder form of willow bark is the easiest to carry with you. If you have it on hand, you can quickly make a tea. To dry the willow or birch bark, simply separate out the paper parts and allow them to dry completely. Grind. Add a teaspoon to a cup of boiling water and make your tea as described above. Store excess in a dry, airtight container.

As we’ve described in another article, tinctures are great for long-term storage, or for use with plants that don’t have a high degree of solubility. It’s easy to make a tincture from willow bark or birch bark as long as you have some alcohol. Vodka will do nicely as long as it’s at least 80 proof. Simply add 1 tablespoon of bark per cup of vodka, cover, shake, and let it steep for at least 2-4 days. Take 1 tsp of tincture 2-3 times daily.

Now you know how to make aspirin tea from a willow tree or a birch tree. The upside to these treatments is that you know exactly what’s in it, but make sure that you know what you’re doing and remember that it’s better to start with too little that too much.

The dosage amounts that I’ve listed here are for adults. You can also use aspirin for kids and pets, but the dosage needs to be adjusted accordingly. Just as with all natural remedies, don’t use them if you don’t know what you’re doing.

If you’ve ever made your own aspirin or used willow bark or birch bark for natural pain relief or to reduce a fever, please tell us about your experience in the comments section below. And remember that knowledge is the only doctor that can save you when there is no medical help around you.