Butter: you use it to make baked potatoes delicious. You smear it on your biscuits and you make finger-licking sauces with it. But what on Earth is going to happen when SHTF and you no longer have access to a grocery store that provides you with it? 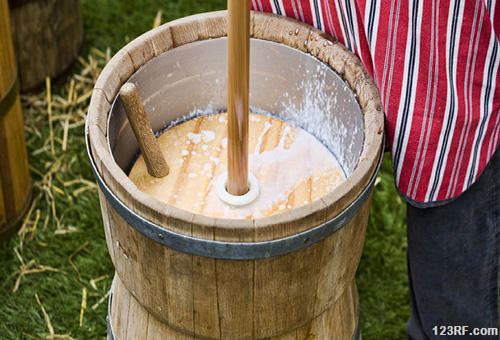 Nothing, if you’re a good prepper, because you’re going to know how to make your own. Today we’re going to teach you how to make butter at home. We’ll also touch on something that most people don’t know about: canning butter. Keep reading!

The Science of Butter

Before you make butter, you have to let the cream ripen. You do that by letting it set at room temperature for several hours until it begins to sour. At that point, the fat crystallizes and a membrane forms around the fat molecules and further separates it from the water.

When you agitate it by shaking it or beating it with a churn (called shearing), the fat globules merge and form balls of butter. As you continue to shake it, the fat continues to separate from the water and proteins left in the liquid and forms bigger blobs of butter, and eventually all the butter is one big clump and the liquid left is buttermilk, which is great to cook with or even drink, though it’s definitely an acquired taste!

The best milk to use for making butter comes from cows that yield milk with a high cream content. These are commonly referred to as milk cows (versus beef cattle). Milk breeds include the Guernsey, Jersey, Holstein and Brown Swiss. Of course, all cows make milk but beef cattle breeds offer a lower yield with much less cream.

A good milk cow will yield several gallons per day and the cream separates easily and naturally without any special equipment. Though goats are popular animals for prepping, their milk isn’t ideal for making butter because the cream doesn’t separate easily without the use of an expensive separator.

It also has a different flavor than butter made from cow’s milk. After you milk the cow, make sure to strain your milk to remove any impurities that may have fallen into the milk bucket, then put it in a large jar in the fridge. The cream will separate out within just a few hours.

Use a spoon or a measuring cup to skim the cream off the top of the milk.  If you skim off all the cream, you’ll be lift with skim milk. If you leave a bit, you’ll have the equivalent of 1% or 2% milk, just FYI.

To start the process of making butter at home, leave the cream out at room temperature for about 12 hours until it just starts to smell sour. Don’t let it set out too long or else it will ripen too much and your butter will taste sour. However, if you don’t let it ripen enough, it will be hard to separate the fat from the milk.

Once the cream has ripened, fill a jar 1/3 full of cream and put the lid on tightly. You can use a churn if you have one or if you want to make a large amount of butter, but the jar method is just as good, if not better. Don’t overfill the jar because it won’t be able to hit the sides of the jar hard enough to make butter.

Begin shaking the jar vigorously so that the cream is banged, or concussed, against the sides and top of the jar. This is what separates the fat molecules from the water and makes them stick together. It’s hard to put a time frame on this process because it depends upon how vigorously you shake, the temperature of the cream, and how well it ripened.

Generally speaking though, it takes anywhere from 15-30 minutes.  First you’ll notice that the cream is getting thicker, then you’ll see little blobs of butter forming. Keep shaking until you have one big blob of butter. Once you have this blob, you can stop shaking unless you want a really firm butter.

Straining and Cleaning the Butter

The next step in the process of making butter is to strain it. Using a colander or other straining device, separate the butter from the buttermilk. Leave the butter in the colander and rinse it with cold water for a few seconds. You don’t want to use warm or hot water because it will melt your butter.

As the cold water chills and cleans the butter, it’ll turn into little crumbles instead of one big glob. Now it’s time to get the water out of your butter. Place it in a bowl with enough room to squish it against the sides. Tilt the bowl a bit so that the water can run out as you work the butter against the sides to “wring” it out.

Once it’s fairly firm and there’s no more water coming out, it’s time to salt your butter. A good rule of thumb is 1 teaspoon of salt per pound of butter. You don’t have to salt it but it does add to the flavor. This is really a matter of personal taste so go with what you like.

Pour the salt in and just start working it into the butter with your fingers or a spoon. Don’t over mix it but make sure that the butter is combined. You’ve now officially made butter at home for the very first time. Easy, right? And butter will make an excellent bartering item in a post-SHTF world. To keep your butter from going rancid, refrigerate it.

Canning butter is a great way to prep for a future without access to your cow in a survival situation. Here’s the process in a nutshell:

Now you know how to make butter at home, as well as how to can butter. This is another great skill that preppers and homesteaders need to know because the more survival skills you have, the better off you’ll be.

Theresa Crouse is the author of the best seller ” Forgotten Lessons of Yesterday”. If you want to discover the real lost American kitchen than you really need her book. 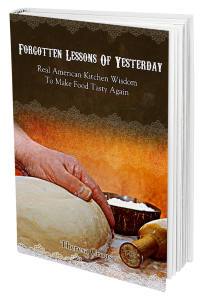 You can get your paperback copy HERE

7 Replies to “Back To Basics: Making And Canning Homemade Butter”