Planning a survival stockpile can be a financial and logistical nightmare. It doesn’t take long before we realize that building that stockpile is going to be an expensive proposition. Regardless of how carefully we try to budget, it is challenging to make it work.

For many, the financial burden of building a stockpile forces them to seek out ways of reducing their financial outlay at any cost. Unfortunately, that cost might just end up being their health, especially if they don’t stockpile the right things.

More than anything, what I see people trying to do, in order to save money, is stock up on carbohydrates, while cutting back on proteins. But both are equally important to a survival diet.

When nutritionists talk about “proper diet”, we usually hear them talking about micronutrients, things like Omega-3 fatty acids and antioxidants. Basically, things the rest of us don’t really understand. Listening to them, you might think that those micronutrients are all we need, that there is no need for macronutrients. But a survival diet has to focus on the macronutrients, even if we ignore the micronutrients.

There are three macronutrients. We need to understand what they are and what they do, in order to put a realistic survival diet together. These three nutrients are: 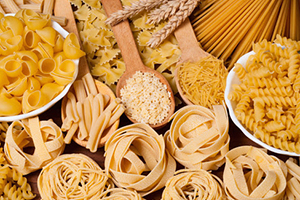 Simple sugars are the fuel that our bodies run on, providing the necessary energy for our body’s muscles to move.

Digestion starts in the mouth, with our teeth breaking food up and our saliva attacking those carbs and breaking them down to simple sugars. A survival diet should be 50% to 60% carbohydrates. 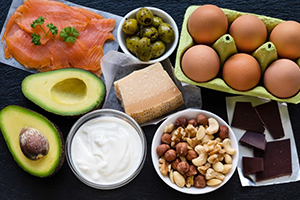 The problem with carbohydrates is that they break down into those simple sugars quickly. Therefore are consumed quickly.

Once that happens, the individual “hits the wall” and is suddenly without energy. That’s where fats come in. They too are broken down into simple sugars, but it takes much longer than it does for carbs. 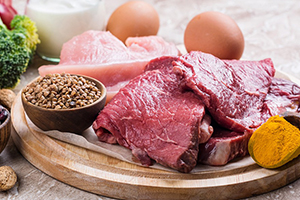 Of the three macronutrients, proteins are the only one we eat for a purpose other than providing energy.

While it is possible for proteins to be broken down into simple sugars, the process is much more complex, so the body only does it in emergencies.

Rather, proteins are the basic building-blocks of life, as all cells are made up out of proteins. Even DNA, the genetic code, is made up of proteins. Since the body is constantly making new cells, it needs a constant source of proteins. If it doesn’t have it, it will cannibalize itself to get those proteins. A survival diet should contain from 10% to 20% proteins.

Related: The 24 Highest Calorie Vegetables for Your Survival Garden

There are two problems with proteins, from the viewpoint of building a survival stockpile. The first is that they are generally the most expensive food we buy and the second is that they are the hardest foods to preserve.

Meat, where most of our proteins come from, naturally has a higher bacterial count than any other food source. That bacteria must be killed, for the meat to successfully be preserved.

Nevertheless, these are problems that we must overcome, in order to have a healthy survival diet. Fortunately, there are many methods which have been successfully used for preserving meat for centuries, all of which are available for us today.

There are also sources of protein available to us, other than animal proteins. By mixing our stockpile so that we have both animal proteins and other food sources which contain protein, we can build a stockpile that we can afford, while providing us with the nutrition that our bodies need. 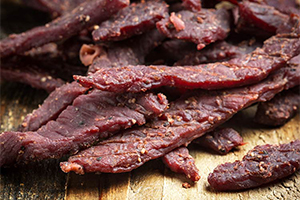 Jerky is nothing more than spiced, dried meat. But the most important part of that jerky, besides the meat itself, is salt.

Salt is a natural preservative, and absolutely essential to making jerky safe for storage.

Making your own saves you money and gives you the opportunity to make sure that it has ample salt, so as to protect the meat. Excess salt can always be rinsed off, before use.

You also want to store homemade jerky in airtight containers, with oxygen and moisture absorbers added. The containers need to be strong enough to make it impossible for rats to chew through them and get to the meat stored inside.

Salt fish is kind of the fish equivalent of jerky, made in much the same way and with a large amount of salt. If anything, salt fish has more salt used in making it, than jerky does. This preserves it well. As with jerky, you’ll probably need to make your own. 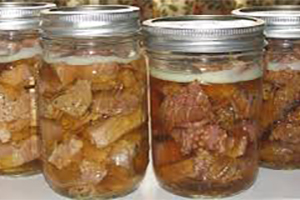 Canned meat is generally cheaper than fresh cuts of meat.

One of the reasons for this, is that canned meat is usually made from muscles of the animal which are tough and are therefore not usable for steaks and roasts.

The canning process provides ample opportunity to tenderize this meat and make it edible.

As with any other canned product, canned meats will last virtually forever. While they may not look very attractive when they come out of the can, they are nutritious and healthy to eat. Having your meat in cans also acts as portion control, helping you to ration out your food and make it last longer.

Textured vegetable protein is a meat substitute, made purely out of plant products, mostly soy. It is made to take on the texture and flavor of different types of meat.

While it is not exactly the same texture or flavor, most people won’t recognize the difference in a casserole or other dish, if they are not told. 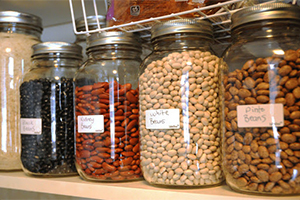 Beans have long been used as a source of protein. All sorts of legumes can be eaten, supplementing the protein received from animals. In many poorer cultures today, beans are the main source of protein, due to cost, rather than meat.

The nice thing about beans is that they are sold already dried, making it extremely easy to package them for long-term storage.

As with any other dry food, the major problem is packing them in airtight packaging, with oxygen absorbers and in a container which is strong enough to keep rodents out. That can be done by putting them in aluminized Mylar bags, inside of five-gallon buckets. Stored this way, they will keep for at least 20 years.

Related: If I Could Only Stockpile 10 Foods

Nuts have also been used as a survival protein source for centuries. In the early days of the American colonies, it was not uncommon to bury barrels and casks of nuts to preserve them for winter or other hard times. Most nuts keep well, in the shell, as long as rodents can be kept away from them.

All types of nuts can be turned into butters, not just peanut butter. They all provide a considerable amount of protein, in addition to being a comfort food.

While cheese is harder to store for prolonged periods of time, it is possible. Actually, the making of cheese came from a desire to convert milk into storable products. Properly stored, cheese can actually last a considerable amount of time. Even when mold grows on it, the moldy edge of the cheese can be cut off, leaving perfectly good cheese for you to eat.

To preserve cheese for a prolonged period of time, triple dip it in wax (paraffin), allowing it to harden between each dipping. Check each dipping carefully, seeking for any pinholes in it, which might flow through. These must be sealed to help ensure that the cheese will keep.

How did the pioneers preserve their cheese?

Grains aren’t normally thought of as a good source of protein, but amaranth defies that definition. This amazing grain has 26 grams of protein per cup, the highest of any grain. It is the only grain which is considered a complete protein source, because it contains all of the essential amino acids.

Sometimes, it’s not just what you do that matters, but what you don’t do. Some protein sources, especially animal proteins, may not keep for prolonged periods of time, even though they are supposedly “preserved”. You have to watch out for them. 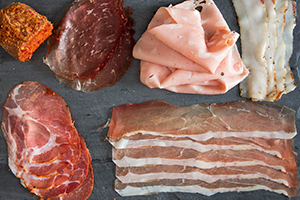 Most of what we know as deli meats or cold cuts originated as “cured meats”. They were a way of taking meat from the animal, which may not otherwise be used, and turning it into usable meat, through the process of curing.

In addition to being preserved by curing, the process also serves to tenderize these meats.

The problem today though, is that what are sold as cured meats or cold cuts, aren’t cured in the same way as olden times. So they are not properly preserved and will not last for a prolonged period of time, unless you can them, in addition to being cured.

The other meat preserving process which is not done like in the olden days, is smoking. What is sold as “smoked meat” today is cold smoked to give it the smoke flavor. But it is not preserved. That requires hot smoking. So, unless you are going to hot smoke your own meats, don’t stockpile smoked meats. Even then, your hot smoked meats will not last as long as meats which are canned or made into jerky.

A Final Note About Fish

Of all the sources of food in the wild, the most abundant is fish. I don’t care where you go, you’re going to need water, and if you find water, there’s a really good chance that there will be fish swimming in it. You should always be ready to harvest those fish, providing yourself with not only food, but specifically with animal protein.

I was surprised to find out that of all the types of animal protein eaten in the world today, fish is the most common. I was expecting it to be chicken. But fish beats chicken by far. Part of that is the ready abundance of fish in the world’s oceans, providing food to us, virtually for free.

Your survival plan should include some means of harvesting whatever fish are available, wherever you are, and making them part of your diet. This means more than just having two little hooks, a bit of line and two lone weights. You need enough fishing gear to keep you fed for the long run, even considering the amount of fishing gear that often goes over the side and is lost forever.