What are you going to do if someday you lose your home in a large-scale disaster of some sort and you have to build a shelter from scrap? Imagine that there will be thousands of people in the same situation as you and the building materials will be scarce or not available at all. 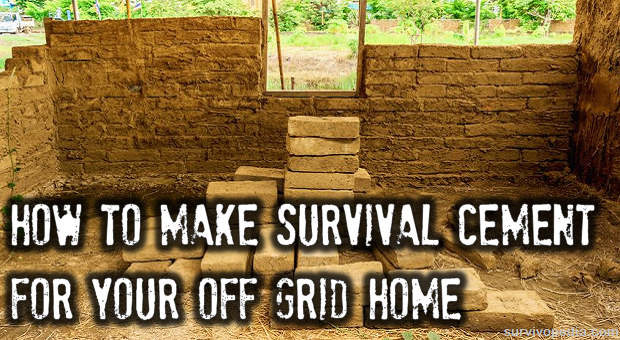 Or, what if you’re stranded somewhere in the wilderness for a long time and you have to build a strong shelter for you and your family, in order to survive cold winter months and prevent wild animals from attacking your premises and food supply?

What Would a Prepper Do?

But the real question is this: is cob strong enough for you and your family in a survival situation?

The short answer is yes. You should be aware of a recent discovery in Utah, specifically the Anasazi ruins, which are thousands of years old and they were built from…yes, you guessed it right: survival cement or cob.

They’re in pretty good shape even today, so that’s all there is to know about cob-made structures: if properly executed and designed, they will last for a long, long time.

This mixture is not a technological breakthrough by a long shot. Romans built amazing stuff 2000 years ago using a secret recipe of cement, superior to what we’re using today in industry. It was called opus caementicium and it was as strong as…well, concrete, but that’s another story.

Obviously, I’m not going to bore you to death with stuff which is pretty laborious and complicated to DIY, especially in a survival situation. I am talking here about things like limestone made cement, which is fabricated using limestone or oyster or sea shells burned in ovens at high temperature in order to remove carbon dioxide. Homemade survival-cement is basically pulverized limestone, seashells or oysters treated at high temperatures and mixed with sand, gravel and water to build concrete. That’s a bit too complicated to do at home.

Cob is today’s topic; cob, or survival cement, is made using just plain old mud mixed with straw or dry grass and water. I mean readily available materials in almost any climate in any part of the world, and with minimal effort, skills and tools.

Why survival cement or cob, you asked? The simple answer is that it’s way more durable than a tent, it stands up pretty well against elements and, most importantly, it’s very easy to make by anybody, even a child. The next question is how to make it, but that’s why you’re reading this article, isn’t it?

What Can You Use Cob For?

Well, you can use cob or survival cement for building a multitude of structures, ranging from primitive shelters to walls or even a house (and an oven inside the house, made from the same stuff) or just about anything you want to build. Basically, if you’re out of options and you require a structure to protect you from the elements or wild animals that’s more permanent than wood, cob, aka survival cement, is the answer.

Using well-made cob and a little bit of skill, you can actually make bricks from the respective mixture, and with bricks you can build an empire, right? Or at least a bunch of pyramids. So, let’s take a deeper look about the ancient art of making your own survival cement.

Step 1: The first element in the cob equation is mud. High quality mud is essential if you want to make the good stuff, and the best mud has a high concentration of clay. How to determine the good mud from the bad and the ugly you ask? Well, that’s relatively easy: if you make a ball from the potential dirt  which retains its initial shape, that’s the droid you’re looking for (yes, I am a big Star Wars fan). You’ve struck gold, and you can go fill a bucket (or more if you’re planning something big) with this mud.

Step 2: You must harvest/gather a respectable armload of straw or dry grasses and  cut them into lengths of six to twelve inches.

Step 3: Next, you must add water to your clay in order to hydrate it enough to a point/density where it will squish relatively easily through your fingers. Don’t hydrate it too much though; the ideal consistency is if you can mold it and it still hold its shape.

The stuff must not be so watery that it will run through your fingers. You just have to homogenize it pretty well. If you want to use the survival cement as a mortar for a stone-made construction, you should strive for a wetter mix; if you’re looking for building bricks or a solid structure made of cob, go for a firmer mixture.

Step 4: You should spread something like a tarp on the ground and put the bucket of homogenized mud and the cut grass/straw at the edges.

Step 5: In the next phase, you must dump the mud from the bucket in the middle of the tarp and put about half of the straw/grass on the top (step five, but who’s counting anyway?).

Step 6: In the next step you must fold a corner of the tarp over the top and stomp it pretty well if you’re barefoot or begin to directly stomp the straws into the mud if you don’t have a problem with getting dirty.

Step 7: Next, after you’ve danced around a bit and the mixture is flattened and spread out, step off the tarp then fold it in half, thus turning the mixture back onto itself. You should repeat the procedure at least 2-3 times until you form something in the shape of a ball. Then, you must add the remaining straw or grass progressively and start stomping again, until the remaining grass homogenizes with the mud thoroughly.  As a general rule of thumb, the optimum grass/mud ratio is somewhere between forty and sixty percent grass, depending on the type of the structure you want to build.

Step 8: The last step is to start your survival cement project as soon as possible. Don’t let the cob sit to dry out because the mud will harden and it’s going to be very difficult to get it into your desired shape or form. Basically, you can start building bricks with the cob/survival cement and you can repeat the aforementioned procedure until you have enough (bricks or whatever you’re doing).

If you have to add water to help with the re-hydration of the mud, keep in mind to add a little at a time, to avoid making the cob soupy and thus unusable. It’s way simpler to make the cob a little wetter than to regain its original consistency by adding mud/straw.

If you want to build tougher cob, remember to place the grasses or straw parallel to each other for creating a re-bar like effect, making for a stronger building material.

Since a picture is worth a thousand words, below’s a video-tutorial in high-definition about how to make survival cement/cob using natural building materials, step by step. The most important thing in the process is to learn how to disseminate good mud/clay from bad, since mud is the main building block in the recipe of high quality survival cement. If you got that part figured out, the rest is easy as pie.

Building survival cement is an immensely fun outdoor activity and the best part is that you can teach your kids how to do it. I mean, it’s educational and it will help them someday. Also, it’s so easy that even 7-8 year olds can be taught to do it, and learning how to build a shelter is vital for a future prepper, don’t you think?

And last, yet another video about how to make bricks from cob/survival cement. With bricks available in virtually unlimited quantities, anything is possible, right?

Saving our forefathers ways starts with people like you and me actually relearning these skills and putting them to use to live better lives through good times and bad. Our answers on these lost skills comes straight from the source, from old forgotten classic books written by past generations, and from first hand witness accounts from the past few hundred years. Aside from a precious few who have gone out of their way to learn basic survival skills, most of us today would be utterly hopeless if we were plopped in the middle of a forest or jungle and suddenly forced to fend for ourselves using only the resources around us. In short, our ancestors lived more simply than most people today are willing to live and that is why they survived with no grocery store, no cheap oil, no cars, no electricity, and no running water. Just like our forefathers used to do, The Lost Ways Book teaches you how you can survive in the worst-case scenario with the minimum resources available. It comes as a step-by-step guide accompanied by pictures and teaches you how to use basic ingredients to make super-food for your loved ones.

If you have other ideas/methods about how to DIY survival cement, feel free to share them in the comment section below.