Wouldn’t it be great to just reach for a jar and know that all you had to do was add water, juice or broth and everything would be ready to cook? 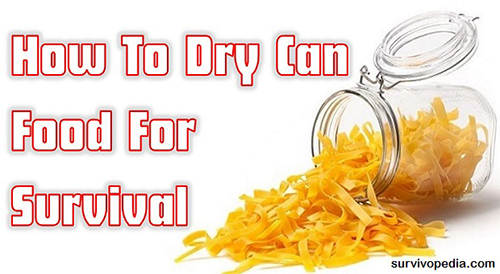 Dry canning is also a good way to extend the life of some dehydrated foods and to keep your dried goods fresh and bug-free.

I have some great tips and instructions to help you get started with your own dry canning projects.

What is Dry Canning?

Dry canning, also referred to as dry packing, has essentially the same purpose as traditional water bath canning: you want to extend the life of the food by storing it in sealed jars so that bacteria that can cause illness or spoilage can’t get in. Dry-canned foods can be good for 30 years or more as long as the seal remains intact.

The difference, as the name suggests, is that you’re not going to be using any type moisture; not in the food or in the process. In fact, the idea of dry canning is to keep moisture OUT. There are a couple of different methods that you can use to dry can your dried goods.

Note to Keep You from Drying Painfully

Yeah, the heading got your attention, didn’t it? Because we’re dealing with canning dried goods, we have to talk about botulism. I’ve talked about it in other articles, including my one on canning meat, but it bears repeating. Botulism spores thrive in high-moisture, low-salt, low-acid environments.

Any food with a pH lower than 4.6 is considered low-acid. This includes mostvegetables, some fruits such as pears and bananas, and all meats. Drastically reducing the risk of botulism is one of the main reasons that most water traditional canning recipes call for adding lemon juice, vinegar, or citric acid to the food when you can it.

Dehydrating is a good way to preserve low-acid foods too. The key to doing it safely is to dry it until it has less than 10 percent moisture; a good rule of thumb is that the food snaps in half when it’s done. Grains will be hard and unable to bite.

How To Dry Can Food For Survival

This is the preferred method for a lot of preppers because it’s easy and it’s thorough. Basically, you have two options.

You can also use Mylar bags and food-grade buckets. Put your food and oxygen absorbers into the bags, seal them, then store them in the bucket.

The oxygen absorber isn’t edible but it’s not toxic, either. The active ingredient is iron oxide, so it doesn’t release any type of harmful gas and doesn’t affect the taste or smell of the food. It’s a great way to preserve any type of dried food from flour to cold cereal. You can use these to preserve your dried meats, too.

Just remember that if you’re dry-canning dehydrated meat, your shelf life still isn’t going to be as long as other foods because usually meat still contains enough moisture or fat to spoil or go rancid eventually. Trimming as much fat and tendon off the meat and dehydrating it after soaking it for 24 hours in a high-salt, high-acidic marinade helps extend the shelf life of your meat, too.

Some sites will tell you that it’s OK to use hand warmers to dry-can your food, but it’s not. That’s fine to use with your guns, ammo, and other non-food items that need to stay dry, but it’s not food-safe.

You can also store foods in PETE plastic bottles using oxygen absorbers. They’re lighter and less bulky than mason jars. Make sure that the bottles have screw on lids with plastic or rubber seals in them. To test to see if your bottle will seal, screw the lid on and submerse it in water. Squeeze. If air rushes out of the bottle and you get bubbles, the bottle won’t work. Just make sure that the bottles and lids are sterile before you pack them.

Did you know that you can use your vacuum sealer to seal dried foods in mason jars? Well, now you do. You can get a jar sealer for your vacuum sealer and suck all of the air right out. The jar will seal and you’ll be good to go. This isn’t great for powdery substances but is OK for foods such as beans, pasta, etc. The powdery stuff gunks up your machine.

One word of warning here: this is a good method if you’re just shooting for storage of foods such as flour that you don’t really have to worry about spoiling, but it doesn’t necessarily get enough air out to prevent the growth of mold. You need less than .02% oxygen for that and there’s not really any way to know how much oxygen is left in the jar with vacuum sealers.

Many people assume that as long as the jar is sealed, the food is safe, and usually that’s correct but there’s always that one-in-a-thousand chance that it’s not. Oxygen absorbers, when used as directed, take oxygens levels down to about .01 percent.

Dry Canning in the Oven

This is one of those topics where people stand on either side of the creek and throw rocks at each other. There are those who swear that they’ve safely preserved their dried goods using this method for years without a problem. On the other side, there are those who say it’s dangerous and should never be done.

As with everything, both sides are right. You can dry can in the oven for years with no problems, but there’s always the chance that the jars are going to explode in the heat.

Now I will lean slightly in the direction of the naysayers in one area: foods that have more than 10% moisture or have any significant fat content (including nuts) shouldn’t be dry-canned because the chance of bacterial growth or rancidity. You also can’t dry-can brown sugar and you absolutely CAN NOT replace water bath or pressure canning wet foods with oven canning.

Personally, I’ve dry-canned flour and some blended recipes in the oven and haven’t had a problem. Of course, I’m super cautious and use common sense. Besides the whole fat and moisture thing, I also never let my jars heat or cool too quickly, but then again, I do the same thing when I’m canning wet foods.

The theory that the jars will explode because of the heat bemuses me a bit because I put them in a pressure canner and expose them to an environment that, to me, is much more severe than a 200-degree oven. However, you’re on your own here. Do it at your own risk, as you do everything.

If you decide to dry can using your oven, here’s how to do it:

Test your jars to make sure that they’ve sealed. Just as with water canning, you may hear the ping or you may not. Touch the top to see if the seal is pulled in and can’t be pushed in with your finger. Store jars that don’t seal in the pantry and use them first.

If you have a problem with the seal, you likely didn’t get the rims clean enough.

Storing our food long-term is critical to our survival if SHTF and we lose our modern sources of food. Dry canning food is also a good way to save money because food is almost always cheaper when you buy it in bulk. Oh, and don’t forget bugs. Maybe it’s just me, but weevil pancakes are gross even though they are a source of protein.

If you’ve dry canned using any of the methods above or have any other ideas or questions about dry canning, please share it in the comments section below!

One Reply to “How To Dry Can Food For Survival”