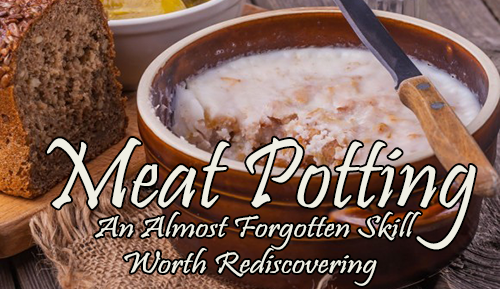 Potted meat or meat potting began as a way to preserve meat before the age of refrigeration. Meat potting is preserving meat in it’s own grease in a large crock pot.

When people slaughtered their own animals, the amount of meat produced was usually much more than could be eaten before the meat began to rot. People evolved other methods for saving this extra meat for later too, such as dry curing and smoking. Potting meat was another means of storing food, and that old tradition lives on today in several parts of the United States.

Early potted meat usually involved the meat of one animal only, most commonly pork. Meat might be ground, or not, and then cooked. The most common method was to use chunks of meat well cooked.

The fat from these chunks of meat was saved and poured onto and around the meat, usually in large jars or in a large crock pot and the fat would help keep the meat from decomposition. Some people added spices to the meat, or made sausages from it, so the meat preserved this way had more flavor. As much meat as possible was pressed into the jars so that they formed a compressed, relatively soft end product. This is how we did it. I remember when early in the morning dad killed a pig and started cutting it up. He gave the pieces to mom who had the wood stove in the kitchen hot and ready to cook. She started frying the pork and prepared the 10 gallon crock pot. This pot was about 18 inches in diameter and 24 inches deep. Mother washed it, and got it just as clean as she could get it. As the pork fried, it gave off lots of grease. She took some of this very hot grease and poured it into the bottom of the crock, sealing and sterilizing the bottom. Then she put the meat she had just finished cooking down onto this 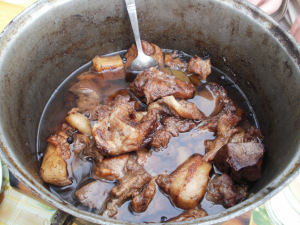 1.  How long can pork be preserved in this way?

In the Summer time we could expect it to last about six weeks. Of course in the Winter it would last much longer. When it went bad there was no question about it, as it really started to stink. (In my research for this subject, I talked with many old timers who never had any meat go bad through many years of potting.)

2. How much did you have to cook it to be sure it was cooked enough?

We cooked it until all the red was gone, then cooked it some more.If there was even one piece put in the barrel partially cooked it could have easily destroyed the meat in the whole barrel. The custodian of the FAQs for rec.food.preserving suggests the meat be cooked to 240 degrees F and the fat that is poured in after it beeven hotter.)

3. What other meats can be preserved in this way?

Really, you can preserve any type of meat.  But if a low fat type of meat is potted, there must be an adequate supply of extra fat to cover the meat as it is cooked and placed in the pot.  (Several old timers talked about potting beef.  But mostly it was used for pork as it furnished it’s own fat.)

4.  Could meat be salt cured and then potted?

Yes, and this was done by some families.  It is hard to say howlong this extended the shelf life of the meat in the pot.

5.  What can I do to enhance my chances of potting safely?

Insure your crock pot is clean and sanitized before you start. Be sure the grease you pour into the crock is always nice and hot as well as the meat.Keep everything as clean as possible. Don’t use the came cookingutensil to take the meat out of the pan as you used to turn or handle the raw meat. Leave the utensil you use to move the meat from the pan into the pot in the frying pan where it can stay hot and therefore sterilized.  Do not touch the cooked meat with anything except the cooking utensil you transfer the meat from the pan to the pot with.   When putting meat into the crock, don’t touch the sides of the crock pot and don’t touch the meat.  Cover the crock with a lid when not putting meat or fat into it.   Remember, your success depends entirely on insuring that not onecell of bacteria is permitted to remain alive in the pot.  And on using the meat, schedule things out so you plan on using the last of the meat within 6 weeks.     (This was not a problem  for the early folks as they often had 10 or more children.)

6.  Should I give this a try to gain experience in this type of meat preserving?

Potting is no longer done for good reason.  It’s just not an approved way of preserving meat, considering our present technology.     This information is given here for three reasons: 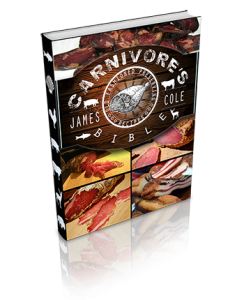 a.  Save the skill from being lost in a rapidly changing world.

(There are fewer old timers every day.)

b.  Help people realize it is an option (in very hard times).

Should you want to give it a try, go ahead.  If you follow these instructions you will probably have good luck.  Remember when you re-heat your meat, cook it good a second time to kill any bacteria that might have gotten into it.

And if it starts to smell bad, don’t mess around with it, but throw it away.   A last comment:   The term ‘scraping the bottom of the barrel’ came from potting meat.  By the time the old timers got to the bottom of the pot, the quality of the meat was often very questionable.  And hence the term means even today ‘using something rather undesirable because it is all there is.

Saving our forefathers ways starts with people like you and me actually relearning these skills and putting them to use to live better lives through good times and bad. Our answers on these lost skills comes straight from the source, from old forgotten classic books written by past generations, and from first hand witness accounts from the past few hundred years.  In short, our forefathers lived more simply than most people today are willing to live and that is why they survived with no grocery store, no electricity and no running water. Just like our forefathers , The Lost Ways Book teaches you how to preserve your food just like the old timers used to do and many other things that were lost through the years. It comes as a hard top book, a step-by-step guide accompanied by pictures.

11 Replies to “Meat Potting: An Almost Forgotten Skill Worth Rediscovering”