Most preppers have some kind of plan for an emergency power source after the SHTF. It might be a generator, wind turbine or solar panels. If you have a river on your land, maybe you’ve set up a water wheel. There are plenty of ways to provide yourself with a reliable source of post-disaster electricity. But what if, for some reason, it’s not available to you?

There are all sorts of reasons why your power supply might not work. What if a stronger than expected EMP damaged your generator? Or maybe you’re downwind of a city that’s been set on fire by a nuke, and no sunlight is reaching your solar panels. Even in less drastic circumstances you could find yourself without power, so it’s always good to have a backup available.

Related: 9 Places Where You Can Find Energy After An EMP

Luckily there’s a simple, easily obtained and fairly cheap item that can be adapted into a good emergency power source – a simple car battery. With a few extra components, and a handful of basic tools, you can easily convert a standard vehicle battery into a power pack that will let you get some essentials running again. You won’t be able to power your house off it, but if you urgently need to use your tools this method will let you do that. Alternatively, you can run a few lamps to provide light while you sit out a storm in your root shelter. A power system based on a car battery is quite versatile and useful, and as long as you remember its capacity isn’t limitless it can be a real bonus in an emergency.

Before you do anything involving electricity, it’s important to have the right tools. Mistakes can be fatal, even if you’re not dealing with house current – a car battery stores a lot of energy, and the DC power it delivers packs a real wallop. Keeping your work tidy matters with electricity, because sloppy connections increase the risk of electrifying something you don’t want to.

This basic tool kit will handle most jobs: 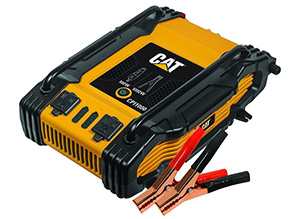 Now that you have the right tools, you’ll need two components. The first is a power invertor. These can be picked up for under $30 on Amazon, and they’re very useful things to have around, so get a couple of them. Look for one that has a cable with crocodile clips; some just have a plug for a lighter socket, and unless you plan to use it in the car that won’t do you a lot of good.

What invertors basically do is turn the current from the battery into a form that all your appliances can use. Car batteries put out 12-volt DC current, which is no use. The voltage is far too low; most tools, appliances and even light bulbs need 110 volts. AC power is dangerous. Because the output is constant, it will kill at a much lower voltage than DC. An invertor converts the battery’s steady output to AC, and also steps it up to 110-volt. Finally, the outlet also has a standard power outlet you can plug things into.

Related: Emergency Bag to Keep in Your Car in Case of an EMP

Connecting it all up is usually very simple. Identify the positive and negative terminals of your battery by the markings embossed on beside the terminals. Attack the black lead from the invertor to the negative terminal, then the red lead to the positive. That’s basically it. Now you can plug in your circular saw or lamp, and the invertor will work like a regular power outlet.

There are a few safety points to watch out for when you’re running things off a battery. First, make sure the battery is in a safe location. Keep metal away from the terminals, because if something conductive touches both terminals at once you risk a short circuit; that can blow up the battery in a hurry, possibly spraying acid everywhere. Water is also bad news. If the ground is wet, put the battery on a stable platform to keep it dry. It’s best if you can arrange a foot of clear space all round the battery and above it.

Next, be careful not to overload it. Running a single power tool or a couple of lamps is fine, but if you plug in the fridge you’ll pull far too much current from the battery. If you’re lucky, the battery will go flat in a hurry. If you’re unlucky it can overheat – and because modern car batteries are usually sealed, meaning pressure can’t escape, it might even explode.

Don’t daisy-chain extension leads from your invertor. A single bar adapter with two or three 40-watt lamps plugged in should be okay, but anything more than that – trying to run a drill and saw at the same time, for example – is risking an overload.

Related: How To Hot-Wire A Car When The SHTF (with pictures)

To improve your power reserve you can wire multiple batteries together in parallel.This has a couple of advantages. First, you increase the total storage capacity, so your appliances will run for longer. Secondly, the total current from the system is equal to the total current of each battery. That means you can draw more current without risking an overload. To wire in parallel, all you have to do is connect matching terminals. If you have two batteries, set them up beside each other and wire the negative terminals together, then the positive ones. Next, connect the invertor to the terminals of the first battery and you’re good to go. If you find a third battery you can attach it to the second one, again wiring matching terminals together.

No matter how many car batteries you connect in parallel, the output will always be 12 volts, and the invertor can handle that. Don’t connect car batteries in series (with the positive of one battery connected to the negative of the next, and the invertor connecting the first and last batteries to close the circuit). If you do that, the output is the total of all the batteries; two batteries gives 24 volts, three gives 36V. You’ll almost certainly destroy the invertor, and you don’t have to add many batteries to be putting out a lethal dose of DC current. Always use parallel.

Car batteries aren’t expensive, and if you can scrounge a decent one from an old car they’re free. Despite that, they make a great power source. They’re rugged, easy to work with and hold a decent amount of charge. In the long run they’re no substitute for the ability to generate your own power, but if you need electricity in a hurry a good battery setup is your simplest and most effective option.