If you’re a chicken farmer, you may already know that chickens actually thrive in colder temperatures, as they’re designed with a unique ability. They are excellent at regulating their body temperatures – way better than humans actually. 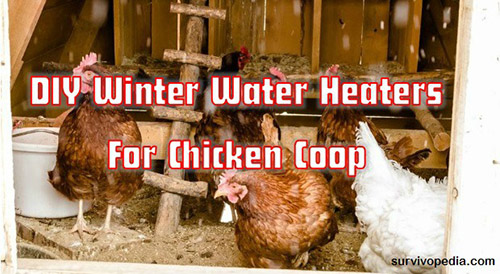 However, with the winter upon us, it would be nice to help our little feathered friends as much as we can. The thing is that during the winter, your chickens require water in order to generate body heat, so it’s still crucial that they receive an adequate supply of fresh, clean, unfrozen water. Going without water for even a couple of hours can decrease egg production for up to 2 days.

Keep Your Chickens Hydrated During Winter

Dehydration sets in quickly with chickens, especially in extremely cold environments. Even though your hens will drink significantly less water during the winter – about 3 times less on average than in the summer – it’s critical that you keep your “girls” properly hydrated during the winter.

Also, depending on where you live, wintertime survival for your chickens can be anything from a walk in the park and a day of busting bricks, if you know what I mean.

Another fact is that chickens are basically 65 percent water and shuffling back and forth to the chicken coop 3 or 4 times a day carrying heavy buckets of water in freezing cold and/or heavy snow is pretty far from my idea of having quality time during the winter months.

The problem with harsh winters and chicken coops is that water tends to freeze rather quickly in sub-freezing temps. Since your chickens need water on a daily basis, you’ll have to find a way to provide it to them without breaking your back in the process.

Water is involved in all aspects of poultry metabolism, which essentially means that if they don’t get enough of it, your girls will not be able to regulate their body temperature properly among other things (food digestion, body waste management etc).

Also, water is very important in the production of eggs, as an egg is made roughly from 74 percent water. If your girls don’t have access to enough clean/fresh water, you can kiss your egg production goodbye during the winter.

Just like humans, poultry are more sensitive to a lack of water rather than a lack of food, so you must be extra careful that they always have access to fresh and clean water (water no older than 24 hours would be ideal).

Learn from our ancestors the old lesson of growing and preserving your own food for harsh times when there isn’t anything to buy.

How To Stop Your Chickens’ Water Freezing

Now, during the winter, your biggest problem is preventing your chickens’ water supply from freezing. I know I am stating the obvious here, but just like with so many other issues, this is easier said than done.

Even if chickens come equipped with pretty tough beaks, they’ll never use them to pierce through heavy ice to get to the water. In other words, this will be one of your many designated jobs during the winter.

There are 2 main strategies when it comes to mitigating the freezing issue:

Carrying water may be quite fun – some may even say idyllic – during the summer, when it’s nice and warm outside, but it will make for a miserable experience during the winter’s freezing dark conditions. While this is basically the most passive option, it’s pretty far from the ideal one, at least in my book. It’s labor-intensive because you’ll have to refill the chickens’ water at least 3 times/day. Which brings us to the second option: prevention.

It pretty much goes without saying that in order to prevent water from freezing, you’ll have to summon a little bit of magic to apply some heat to the water container in your coop 24/7.

I must emphasize the word “little” here, because chickens aren’t very fond of drinking lukewarm water, pretty far from it actually, so you’ll have to pay attention to that issue. You should concentrate only on keeping the water from freezing because, as a matter of fact, chickens really love sipping freezing-cold water.

Again, there are 2 strategies involved here: if you’re not DIY friendly, you can always take the easy approach and buy an electrically heated pet bowl, though you’ll have to cough up a few bucks in the process.

Also, this solution only works if your chicken coop has easy access to a source of electricity (solar panels would work, but that’s overkill for your budget). These bad boys will do the hard work for you, but you’ll have no fun in the DIY-ing process and that’s a bummer.

Now, the flip-side to that coin is to use that big brain of yours along with a little elbow grease and build your own water heater.

As long as you’re handy with a screwdriver and you don’t have a problem with getting your hand dirty whilst saving a few bucks in the process, you can do this. To improvise a water heater you’ll just need a few basic materials and tools, including:

When turned on, the light bulb will provide enough heat to keep the cinder-block warm provided it’s strong enough. It needs to be at least 40 watts. Obviously, if you place the chicken’s water bowl on top of the cinder block, it will stop the water from freezing without making it so warm that they won’t drink it. Depending on how low your temperatures drop, you may need a stronger bulb, or a weaker one.

Make sure you isolate all the electrical parts properly, because you don’t want to wake up in the morning and discover some fried chicken inside your hen house.

If you don’t have electricity available or you just don’t want the fire hazard or you’re afraid of electricity, wiring and what not, don’t despair just yet. We have another solution for you: the Sun-is-your-best-friend approach. The idea behind this DIY job is to use the sunlight (if any) for keeping the water from freezing.

Since chickens are usually sleeping during the night, they’ll only need water during daytime, when the sun is presumably up and shining.

For this DIY job, you’ll only need:

The idea with the tire is that, being black, it will absorb the sunlight, thus keeping the water from freezing.

The styrofoam is used for insulating. Remember, this neat trick only works if there’s enough sun, which is a best case scenario during the winter. This may not be reliable enough if you don’t live in an area that gets lots of sunny, albeit cold, winter days, though it’s worth mentioning.

It’s essential to remember during the cold season to never use a metal water container. Always go for dark-colored (ideally black) plastic or rubber containers during the winter. For example, a deep-black rubber container alone, if placed in the sun (if any) will prevent the water inside from freezing to temperatures several degrees below freezing.

Also, the larger the surface area and depth, the longer it will take for the water to freeze. A 40-gallon rubber-made water trough will rarely freeze during the winter, but it all depends on where you live.

Remember that our ancestor survived harsh times. Click the banner below and learn how to make food taste like it did in your childhood. Rediscover the recipes our grandmothers used to make. 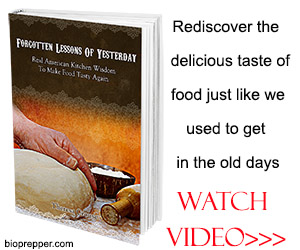