Oh the delicious flavor of smoked ribs, brisket, or even fish and seafood…

It’s a distinctive flavor, but varies significantly based on your methods. It can be sweet and fruity, or deep and woodsy, or anything in between. The beauty is that you can mix and match and blend to find your favorites and make them your own.

Smoking used to be used as a preservation method but that fell out of use with the invention of refrigeration and isn’t a great method anyway, as it requires a smokehouse and another preservation technique such as salting to ensure food safety that changes the taste and palatability of the meat.

Read also: HOW TO BUILD A SMOKEHOUSE IN YOUR BACKYARD (WITH PICTURES)

There are also seven ways to Sunday that you can ruin meat while you’re smoking it, too, and that’s not only expensive, but disrespectful to the animal. In a survival situation, it may also mean the difference between eating and going hungry.

The main issue that you may run into is that you’re going to burn it up. Until you get the hang of it, it’ll be easy to go from not-quite-done to oops-I-made-leather.

So, to save you time and money, and to save wasting perfectly good meat, we’ve gathered some tips to help you get started.

9 Tips To Smoking Meat Any Homesteader Should Know

There are four basic types of smokers, and the first decision you need to make is which one’s best for you. 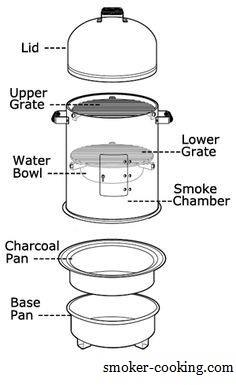 Electric smokers are probably the easiest to use because all you have to do is plug it in, put the meat in it, and forget about it until the timer goes off.

It’s basically a crock-pot for smoking meat. There are a couple of downfalls, though. It’s pricey, and you don’t quite get that deep smoky flavor.

This is the next step in easy smoking. Using a gas smoker gives you the safety measure of controlling your temperature while still being able to add wood chips for flavor, though it won’t permeate the meat and give it that deep, smoky flavor. Also, you have to have gas (propane) to run it, so it won’t be much of an option if SHTF.

Now you’re getting into an area that requires skill. Charcoal smoking is a favorite even among professional meat smokers because charcoal burns long and steadily and you can add wood to imbue the flavors that you want. You have to know what you’re doing if you’re going to successfully use a charcoal smoker, but it’s nothing you can’t pick up with practice.

Cooking with wood is the most difficult method but also imparts the biggest, purist smoky flavors. It’s tricky to cook only with smoke because it burns at different speeds depending on the type of wood you use and how seasoned it is.

You need to tend a wood smoker closely because you want to maintain an even temperature that’s hot enough to cook but not so hot that your meat will be charred on the outside and raw in the middle. You’ll use a combination of chips and blocks to maintain the temperature and you’ll also need to watch the airflow closely so that you’re not getting gusts that cause fluctuations in the temperature.

OK, now that you’ve chosen your method, you need to choose your wood. Different woods imbue different flavors, and some go better with certain meats over others. In other words, match your meat to your wood, or even to the occasion and what other sides you’re going to be using.

You can either toss them in and they’ll burn up quickly, or you can soak them in water for several hours so that the wood doesn’t burn up quickly. Wet wood also smokes more. Remember, smoking is meant to be a long process.

The standard with the pros is to use logs and larger pieces dry and smaller pieces and chips wet. Another advantage is that if the wood is wet, it helps prevent flare-ups.

I have a friend who’s big into smoking and he soaks his in Guinness, which gives the meat a little extra something, and he says he’s also soaked it in wine, but I haven’t tasted it when he’s done that. Chances are good that if he did it, it was delicious.

If you soak your chips, wrap them loosely in foil and poke holes in it.

Ahhh … the meat of the matter! The entire process that we just discussed depends largely upon personal taste and what type of meat that you’re going to use. Remember that smoking is usually long and low, or at least medium, so you can get away sometimes with using a larger cut of meat, and sometimes a tougher cut, though you don’t want to go too cheap on the meat.

Fights have been started over this question in parts of the country where smoking is a point of pride. If you decide to use a marinade, whether yours or one you buy, score your meat a little so it’ll soak it up better, and leave it in the fridge for at least 8 hours.

If you’re using a charcoal or wood smoker, you can use a pan of water to help keep the temperature regulated and keep the meat moist.

Too Much of a Good Thing is Bad

The general rule of thumb is that smoking shouldn’t take up more than half of the cooking time. Also, you want the smoke to be a steady stream, not huge and billowing.

Leave the lid shut. When you open it, you let the smoke out and you mess with the temperature inside the cooker. If you want it to be awesome, leave it alone.

The star of this show is the meat, not the marinade, the rub, or the smoke. Everything you do is to enhance and complement the flavor of the meat. Respect that. Don’t use anything that’s so strong that it covers up that natural deliciousness.

Now that you have a general idea about smoking, what are you waiting for?

Are you a long-time smoking pro? Share some of your tips with us in the comments section below.