Let me just start out by saying that I spent hours pouring over other peoples’ videos and recipes to learn how to can bacon. I tried them all out and found them sorely lacking. I then proceeded to can about 20 pounds of bacon on my own to come up with the perfect canned bacon, which in my opinion just didn’t exist…until now.

And canning bacon is worth the effort. It’s a great way to make your own customized flavored bacon with ease, and it’s just handy to have pre-cooked bacon on-hand for recipes and snacks. It’s great while traveling or car-camping, and it’s nice to have canned bacon when the electricity goes out, or the weather makes it impossible to make it to the store.

All the recipes and methods I found for canning bacon involved taking strips of raw bacon, slapping them down on parchment paper, rolling them up tight, jamming the role into a quart-sized jar, and canning for 90 minutes. I tried this method and it missed the mark for several reasons:

I wanted my canned bacon to meet certain criteria so I could eat it with the most enjoyment and least amount of hassle, and use it in recipes to the best possible advantage:

The secret to meeting these criteria is to fry the bacon before canning. This solves all of the above issues, plus it allows room to include enhancements with the canned bacon, including making bacon bits ready for recipes and making flavored bacon. Here’s what I did for each:
.
(Note: Make sure you follow the pressure canning guidelines found at the National Center for Home Food Preservation called  ”Selecting, Preparing and Canning Meat: Strips, Cubes or Chunks of Meat” found here. You cannot safely can meat without a pressure canner and canning bacon, though it is done often, is not recommended so you need to decide for yourself if you want to do this. Many can bacon strips without problems.)
.
CANNED BACON STRIPS
.
Here are step-by-step instructions for the process:
.
One pound of thick-cut bacon fits perfectly into a pint-sized, wide-mouthed jar (this will likely hold true for regular bacon, too). Weigh the bacon raw. Before cooking you will need to cut the bacon strips in half so they fit in the jar, but I find this to be a benefit after opening the bacon instead of dealing with full strips. The half-strips are easier to manage for recipes and they are easy to throw in a frying pan for a quick heat-up. Also, opening a pound of bacon at one time is sufficient; if you used a quart-sized jar you’d likely have to deal with two pounds of cooked bacon at once, which seems like a lot to handle at one time.
.

Weigh about 1 pound of bacon for a pint-sized, wide-mouthed jar.

Fry the bacon in a skillet on medium heat until almost cooked through. It will continue to cook after you remove it from the pan and you don’t want it to be over-done. Remember that you’ll be pressure canning this bacon for well over an hour and while that cooking won’t contribute to the browning of the bacon, it will cook it a bit more.
.

Fry the bacon until almost cooked through.

.
After your bacon is cooked, lay it on a plate with some paper towels to soak up the extra grease. While it is draining, cut a 24″ piece of brown parchment paper and lay it on your counter. Lay your bacon strips out on the paper as shown below. Notice that there are several inches of paper left at the end — this will ensure that your bacon is nicely tucked in while you roll your bacon package. If you use thin-cut bacon you will have more slices of bacon to put on the parchment paper. It’s ok to overlap them on the paper. You just want to make sure that you still leave about 3″ of paper at the end.
.

Lay your bacon on 24″ of brown parchment paper.

.
Now it’s time to add any desired flavoring to the bacon. Two of my favorites are Tabasco sauce and 100% pure maple syrup. For the Tabasco sauce, just take a bottle of Tabasco and sprinkle it liberally over the bacon. Have a really heavy hand with this — if you want Tabasco bacon why go half way? For the maple syrup, it’s important to only use 100% pure maple syrup; synthetic syrups just don’t stand up under the rigors of pressure canning. I use Grade B syrup and it works great and is easier on the budget. Make sure you brush plenty on to the bacon here, too.
.
You can consider other flavorings for your bacon besides just maple syrup and Tabasco sauce, including brown sugar, chili powder, cayenne pepper, dried thyme, dried basil, cinnamon, or a mixture. For dried herbs and spices, just sprinkle them liberally over your bacon before rolling.
.

Now you can add flavors to your bacon. Here I’m giving the bacon a 100% pure maple syrup wash.

.
Now it’s time to start packaging your bacon for the jar! You’ll notice that the width of the parchment paper allows you to fold it in thirds around the bacon. Just take both sides of the paper and fold them around your bacon. Use your hands to press the paper lightly around the bacon to ensure that the sides are creased in preparation for rolling the bacon.
.

Fold the parchment paper in thirds over your bacon.

.
When you roll up your bacon, start at the end that has the bacon closest to the edge of your parchment paper. When you start rolling, make sure your first few turns are nice and tight. The bacon almost rolls itself, but you do need to guide the parchment paper, ensuring that the folds remain in tact. You want your roll to be firm, but don’t smash the bacon. There’s no need for that and why do you want to punish perfectly good bacon in that way? You’ll notice that when you get to the end of your roll that the extra paper left when you laid your bacon strips on the parchment paper secures your bundle.
.

Roll your bacon up nice and tight, without smashing your strips to smithereens. You should love your food, not torture it.

.
Your roll of bacon will look adorable, and it will fit neatly into a wide-mouthed, pint-sized canning jar, which you have already sterilized and prepared for canning .You might need to nudge the roll in the jar a bit, but you should not have to jam it into the jar; if you do your parchment paper will tear and your bacon will be crying out in agony. This is the reason it’s so important to use a wide-mouthed jar; a narrow-mouthed jar will obviously cause problems when you try to insert your roll. If you find it is too hard to push the bacon into the jar, unroll it and remove a few pieces of your bacon, re-roll your bundle and try again until it fits snugly but is still easy to insert into the jar.
.

A completed roll of bacon, ready for the jar.

.
Place a lid on your jar and it’s ready for pressure canning (see below.)
.

The roll fits neatly into a pint-sized, wide-mouthed jar.

.
CANNED BACON BITS
.
To make a jar of bacon bits, take your raw bacon and cut it (kitchen scissors are easiest) into large pieces about 1″ square. Cook through and place into your jars; it’s not necessary to use parchment paper when canning bacon bits. Before placing them into the jar you can add flavorings like pure maple syrup, Tabasco sauce, brown sugar, pepper, or herbs like thyme or basil. Screw the lid on and pressure can (see below).
.
PRESSURE CANNING
.
Now it’s time to pressure can your bacon. You’ll need to process your meat following the times and pressure guidelines presented in “Selecting, Preparing, and Canning Meat” found here.
.

Make sure you label your cans of bacon with a sharpie before putting them in the pressure canner.

Maple syrup bacon, pressure canned and pulled from the jar the next day.

.
USING YOUR BACON
.
Now is the fun part. After you open the jars of pressure-canned bacon there are different things you can do:
.

Want more old, almost lost recipes our grandmas used back in the day? Than you need this book, Old Time Wisdom. Get your copy HERE 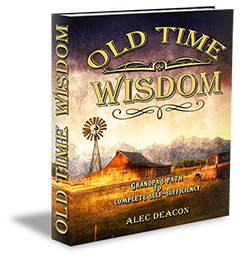