Have you heard the news? The Army has an offer for those of you who are particularly brave. You no longer have to join the Army if you want to serve your country. You just have to eat their food.

U.S. Army researchers invited men and women to help improve their Meals, Ready-to-Eat — if those volunteers can eat nothing else for three straight weeks.

Participants would eat and drink the provided rations for 21 days, then go back to a normal diet for 10 days, according to the study. It’s open to people between the ages of 18 and 62 who “meet additional screening criteria.”

The goals of the study go beyond improving the taste, the Army Times reported. Researchers say they’re hoping to add other nutrients to the food and to look at its impact on bacteria inside the digestive system, potentially improving what they call “gut health.”

Don’t worry. You’ll be properly compensated for your service.

Volunteers can’t have alcohol to help swallow the food — they’ll need to avoid all outside food and drink for those first three weeks, officials say. The Army will pay volunteers $200 each for completing the study.

All kidding aside, I don’t think you could give me enough money to eat MREs every day for three weeks. Or at least, the Army doesn’t have enough money to compensate the number I have in my head. I’m willing to bet that a lot of you reading this feel the same way. For those of you who haven’t tried MREs before, let me fill you in on what’s going to happen to the poor bastards who volunteer for this study.

It’s probably not a coincidence that the researchers are trying to study the effects these meals have on gut flora. If you read the ingredients list for these meals, you’ll find that they contain a lot of the same garbage you would find in junk food. Lots of chemicals and GMOs, and much much more. If you had a prepared MRE dish in front of you, and you closed your eyes before taking a bite, you’d probably recognize the taste as something remarkably similar to that of fast food, convenience store take out, or TV dinners. Though it’s prepared in a way that allows the food to last much longer, that’s pretty much all it is.

So what do those junk foods do to your gut flora? As some studies have shown, they can absolutely obliterate vast swaths of your stomach’s bacteria within a matter of days. This might help explain why MREs are notorious for causing constipation (which is also caused by their lack of fiber and high calorie content). Other signs of poor gut flora include inflammation, bloating, gas, fatigue, and diarrhea.

So if you ate nothing but MREs for three weeks, it’s safe to say that your body would be kind of a mess. Granted, some people don’t seem to have any problem with digesting MREs, but for most us, three weeks would be devastating. In the past, a lot of veterans have reported severe constipation for the first few days, sometimes followed by the exact opposite for another few days.

However, it is possible for your body to adapt to this stuff. After all, many of our servicemen have had to eat MREs for months at a time when on deployment, so it’s certainly possible, even if it’s not desirable. Given enough time, your bowel movements would probably return to a (somewhat) normal state, and the other side effects would subside. The horrible ingredients in these meals would still be doing damage to your body, but eventually you’d return to functional state.

Once you stop eating them though, you might run into a few more problems. That’s why this study wants to follow their volunteers for a while after they go back to eating normal food. After eating MRE’s for three weeks, your digestive system would have adapted to the food. Going back to real food could be a real shock to the body. Diarrhea, gas, and cramps would probably be felt for at least a few days, until the digestive tract “relearned” how to digest real food.

Overall, I can say without a doubt, that I do not envy the volunteers for this study. While some people seem to be able to handle MRE’s without any severe symptoms, eating them for three weeks would be a wretched experience for most of us. That is after all, one of the reasons why they’re paying people to do it.

On a final note, if you have any MRE horror stories, feel free to share them in the comments.

This information has been made available by Ready Nutrition
Don’t rely only on MREs for long term survival. If SHTF you won’t be able to eat only MREs. Saving our forefathers ways starts with people like you and me actually relearning these skills and putting them to use to live better lives through good times and bad. Our answers on these lost skills comes straight from the source, from old forgotten classic books written by past generations, and from first hand witness accounts from the past few hundred years. Our ancestors lived more simply than most people today are willing to live and that is why they survived with no grocery store, no cheap oil, no cars, no electricity, and no running water. Just like our forefathers used to do, The Lost Ways II teaches you how you can survive in the worst-case scenario with the minimum resources available. It comes as a step-by-step guide accompanied by pictures and teaches you how to use basic ingredients to make super-food for your loved ones. Watch the video below: 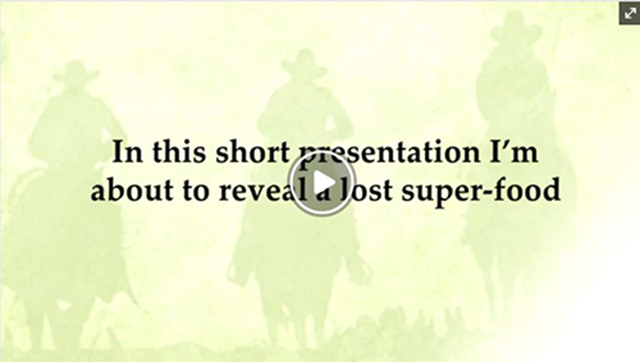