Deciding where you are going to go in the event of a doomsday situation is a big deal. Everyone has their own criteria for what is the perfect place to try to survive. Based on what I have researched, this is my opinion of the best areas in the United States to bug out to.

My requirements for a good bug out location is that is needs access to water, food (hunting, fishing, good for gardening), not a common natural disaster area and not overly populated. I generally think of a permanent bug out location as being a homestead to rebuild from after a catastrophic event wipes out a large majority of the population.

Most requirements will change based on many variables. One of those will be the amount of time you have to prepare the area before you retreat to it. These locations I feel would be great if I could buy some land and get a sustainable camp started, but will also do just fine if I don’t have much time to pre-plan and need to figure it out on the fly.

Southern Colorado:
Southern Colorado is on the top of my list of bug out locations. A place at the base of the Rocky Mountains being ideal. Mountain ranges have great wildlife and water sources, but the nice thing about the Rockies is that there are no volcanoes. Staying to the south end of the state will hopefully limit exposure if Yellowstone erupts. Colorado’s population is fairly low and property prices are lower than average. The climate is fairly temperate with summers that don’t get too hot and winters that don’t get too cold. The cold will depend on how high up the mountain you go.
RELATED: Map: Where You Don’t Want to Be When It Hits the Fan

Northern New Hampshire/Maine:
The northern New England area is ripe with wilderness and natural resources. The population density of Maine is just lower than Colorado and New Hampshire is higher but the population thins out up north. The chances of natural disaster are relatively low. Most likely there will be winter storms. Hurricanes can reach that far north but are only a hazard if you live close enough to the coast. There is a wide variety of hunting and fishing locations and even in the cold you can do your gardening in a greenhouse.

Eastern Kentucky:
I was originally looking at eastern Tennessee but found there to be to many nuclear reactors in the area. Fortunately a short distance to the north takes you to eastern Kentucky where you can take advantage of the same environment without the messy nuclear fallout. The base of the Appalachian Mountains in this area would make a great bug out location to survive the end of days. The mountains have no active volcanoes, but the area is known for tornadoes. The deeper into the mountains you go, the less likely you are of experiencing a tornado as they tend to stay a bit west of the mountain range. Some might be concerned about the New Madrid Fault but since it is on the west end of the state, any eruption would be only barely felt in the Appalachians. You have plenty of food and water sources and people have been living off the land in Appalachia for centuries.
RELATED: America’s Death Zones: Where NOT To Be When It Hits the Fan

Southeast Ohio:
The area to the West of the Appalachian Mountains in Ohio is home to the largest community of Amish in the United States. This is a community of people who have been living off the land with no technology forever. If the area works well for them, who am I to argue? I wouldn’t try to inject myself into their community, but having them close by to get tips from wouldn’t be a bad thing as well as being able to barter with them. The population density of Ohio is fairly high, but most of that is in the cities. There is one nuclear power plant in western Pennsylvania that ranks low in safety that could affect the area. Ohio is on the top of the list of states that are least likely to be destroyed by a natural disaster. They have no flooding, no tornadoes, no earthquakes and no volcanoes. Good water and farming resources but winters are long and cold.
RELATED:The Best Place To Bug Out In The United States? Here Are 9 Maps To Consider

Alaska:
Alaska is always one of those locations that people either love or hate. It is a place that people have been living off the land in the wilderness for centuries despite the bitter cold. It has the lowest population density in the country at 1.2 people per square mile. Depending on your location you could experience earthquakes or feel the effects of a volcano, but the overall rate of natural disasters is relatively low and there are no nuclear power plants. Hunting and fishing are some of the best in the country and fresh water is plentiful. The warmer months will be spent preparing to survive the winter months but many people have had no problem surviving in Alaska long term.

First of all, let me say THANK YOU for being a wonderful reader of bioprepper.com!

You’re constantly learning how to best keep your family safe while saving your hard earned money. So I want to give you something on the house.

What I’ve done these past couple of days, was to get in touch with my friends from ApeSurvival.com. They have some amazing life saving items for sale, that I knew I had to share with my most trusted customers.

But I didn’t want to get them at a discount. I wanted to get them for FREE. Unfortunately… I couldn’t get them all… But I got THE BEST ONE they have!

This FREE Gift will prove to be a miracle… whether you’re having a flat tire in the middle of the night… or just checking out the premises without waking up the whole house… So it’s a must have in both everyday life and unexpected scenarios.

It’s called the EVATAC TACLITE. And it’s one of the best tactical flashlights on the market: 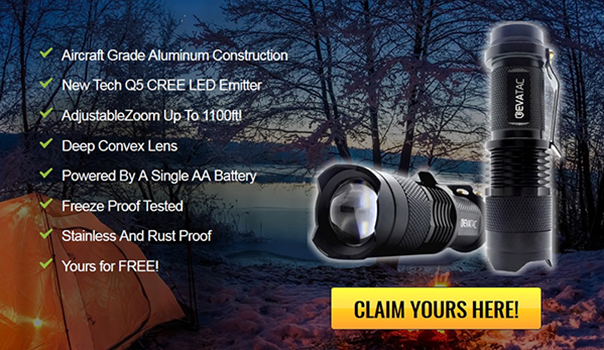 The EVATAC TACLITE is yours for FREE, as a thank you gift for being our faithful subscriber. So don’t wait out. Get yours while they’re in stock:

41 Replies to “Best Places To Bug Out In The US”